The Achenar system is notable as the home of the Empire, one of the galaxy's three superpowers. Capitol, a satellite of the sixth body in the system, is the primary residence of the emperor, and the seat of Imperial power. The system is characterised by widespread opulence and ostentation. The permit for this system can be obtained from the Imperial military.

Achenar is the capital system of the Empire. It is located in the Core Systems within the Inner Orion Spur. Access to Achenar is restricted, and requires a permit that can only be obtained by achieving the Imperial Navy rank of Squire.

Capitol is the political and cultural heart of the Empire. It features the Imperial Palace, the seat of the Emperor and the Imperial Family, and Senate House, where the Imperial Senate convenes. The Imperial Guard is responsible for the system's defence.

Rise of the Empire

Achenar was charted and settled in 2292 by a colonial mission led by Marlin Duval, who sought to establish an independent government outside the rigid bureacracy and social conformity of the Federation. The colonists settled on the habitable moon Achenar 6d, which was already home to a primitive native species known as the mudlarks, and formed the Republic of Achenar based on democratic principles. The untimely deaths of Marlin and her immediate family in 2296 gave control of the Republic to Marlin's brother, Henson Duval, who reorganised the Republic into the Empire of Achenar and instigated a terraforming campaign on Achenar 6d. Henson was formally crowned as the first Emperor in 2320, and Achenar 6d was eventually renamed Capitol.[1]

The mudlarks were soon rendered extinct by human activity on Capitol. The Federation claimed that Henson had deliberately eradicated the mudlarks, while the Empire insisted that their deaths were the tragic result of the human colonists inadvertently introducing new pathogens into the moon's native environment. Whatever the truth, the Federation used the incident as pretext to invade Achenar in 2324 in an attempt to annex the colony. Unexpectedly, the Empire prevailed in the Battle of Achenar, which it called the Great Battle of Liberation, expelling Federal forces from the system and establishing the Empire as the second superpower of the Core Systems.[1][2][3][4] When the Empire and the Federation reached a peace agreement in 2381, Emperor Henson ordered the construction of the Hall of Martyrs underneath the Imperial Palace to memorialize those Imperial citizens who had lost their lives.[5]

The Empire completed the terraforming of the moon Conversion, previously Achenar 6c, in 2696, marking the Empire's 400th anniversary. Achenar 6b was terraformed and renamed New World sometime between 2855 and 3006.[1]

In the late 33rd century, starport hotel chain Costada Voyager achieved international renown when it was granted a license to open locations in Achenar.[1]

Emperor Hengist Duval was assassinated by Brendan Paul Darius of Emperor's Dawn on Capitol on August 5, 3301, the same day he had planned to marry Florence Lavigny.[6][7] His state funeral was held on September 3, after a four-week period of mourning.[8] The Imperial Senate elected and crowned Arissa Lavigny-Duval the 16th Emperor of the Empire on October 18, 3301.[9]

Following the assassination of Prince Harold Duval by the Neo-Marlinist Liberation Army, a state funeral was held on Capitol on September 24, 3306, and he was interred in the Hall of Martyrs on October 8.[10][11]

The starport Dawes Hub was bombed by the Neo-Marlinist Liberation Army on March 11, 3307, along with starports in eight other major systems. Hundreds of thousands of people were killed in the Nine Martyrs attack, and many more were injured. The coordinated attacks occurred during the Galactic Summit in Sirius, and caused the conference to be cancelled.[12][13] 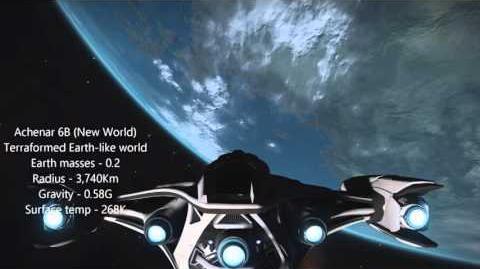