The Alioth system is notable as the home of the Alliance, one of the galaxy's three superpowers. The system was the focus of conflict between the Federation and the Empire in the 3200s due to its tremendous mineral wealth, but the expulsion of Federal and Imperial forces by Alioth's indigenous population led to the creation of the Alliance in 3230. The permit for this system can be obtained from the Alioth Independents.

Alioth, also known as Epsilon Ursae Majoris, is the capital system of the Alliance. It is located in the Core Systems within the Inner Orion Spur. Access to Alioth is restricted, and the permit can only be obtained by becoming Allied with the Alioth Independents minor faction in any system where it has a presence.

Garden City on Turner's World is the political capital of the Alliance, and is home to the Alliance Assembly and the Alliance Chamber of Justice. The Council of Admirals meets on the starport Donaldson, and Alliance Interpol's headquarters is located on Wicca's World. The shipbuilder Lakon Spaceways is also based on the planet Alioth 1 A, and offers a 5% discount on all of its ships available at ports throughout the system.

Alioth was selected as a colonisation target by the Federation in the decades after it and the Empire established a tenuous peace in 2381, ending the cold war that followed the Battle of Achenar. With Imperial territory expanding rapidly and the Old Worlds becoming an economic powerhouse, the Federation opted to venture into new frontiers for resources, away from its rivals, resulting in the launch of a new wave of colonial missions in 2398. Alioth, which proved to be even richer in resources than survey data had indicated, was colonised in 2452. The first settlement was constructed on the Earth-like World Fruitcake, so named because of the small yet plentiful mineral deposits pervading its loamy soil.[1][2]

Sirius Corporation entered Alioth in 2463 and instigated a war with two other corporations for control of the system's gas mining rights. The Empire took the opportunity to establish its own presence in Alioth by sending a fleet, which it justified by claiming was for the protection of the local colonists. Sirius Corp in turn appealed to the Federation, which sent a fleet of its own. Instead of a military response, the Empire deployed infiltrators into the colony who incited a revolution; amid the chaos, Alioth's Federal charter was destroyed. With the Federal fleet distracted from guarding the gas mining platforms, the Imperial fleet attacked and routed it. Federal reinforcements subsequently retook the platforms, but neither side was able to secure a definitive victory and the tug of war continued for years. Tensions began to ease in 2482, as the Old Worlds eclipsed Alioth in Hydrogen Fuel production and the system was visited by retired Federal Congressman Rory Priest of Altair. In 2489, Sirius Corp agreed to relinquish its monopoly over the gas mining platforms in exchange for a monopoly on gas transportation in the system, bringing the first war for Alioth to an end.[2]

The system again became the center of the Hydrogen Fuel trade in 2530 in response to the Old Worlds continually raising the sale price to the Federation and Empire while allowing non-aligned systems to purchase it much more cheaply. By this time, the people of Fruitcake were chafing under the increasingly harsh control of an Imperial Governor. Terrorist attacks against the Imperial regime escalated into a full-blown resistance movement in 2541 that called itself the "Cakers". The Cakers were responsible for numerous significant attacks, including the attempted suicide hijacking of the Imperial tourist liner Everichon in 2559, and the downing of an unmarked Federal dropship carrying mercenaries tasked with the capture of a major fuel refinery in 2583. Public support for the Cakers was split by rumours that the group was receiving Federal assistance, and chaos abounded as privateers and self-proclaimed patriots alike accepted commissions from all sides to provoke unrest.[2]

The Federation attempted to entice Alioth to rejoin it in 2600. Hoping to galvanize local support for the Federation to undermine the Empire's influence, President Sadiq Kessler voided all of the remaining membership requirements in Alioth's Federal charter and offered the system full membership. The act only divided Alioth's resistance movement, the Cakers, into rival pro-Federation and pro-independent camps. The pro-independence faction prevailed in 2603, with its leader Quentin Devises securing control of the Cakers and Fruitcake, and declaring the moon would be a free trade port. Devises formally rejected the Federation's membership offer in 2606 after stringing along Federal diplomats for three years.[2]

In 2617, munitions worker Tom Quaterson was tried and executed for selling food coupons to the poor, triggering a general uprising backed by the Cakers and other rebel groups. The residence of the Governor of Fruitcake was stormed, and workers seized control of gas platforms, demanding Alioth's independence. In an unprecedented move, the Federation and Empire cooperated to retake the system in 2618. Quentin Devises was quickly captured and executed. The two superpowers agreed to divide Alioth's assets, with Fruitcake becoming a Federal Protectorate and renamed Gordonworld after Federal General Charles C. Gordon, while all local space facilities were conceded to Imperial rule.[2]

The Empire succeeded in using experimental rapid-terraforming techniques to terraform the moon New California in 2621. Many residents of Gordonworld defected to New California in response to the Empire's promises of a "new life". Unfortunately, the terraforming process had unforeseen side effects on genetic structure of the New Californians, which became apparent in 2853 and created a major embarrassment for the Empire. Emperor Trasken Duval II enacted martial law on the moon in 2854 to subject the colonists to a mandatory genetic correction programme, but a sect of insurrectionists called the "New Cakers" overthrew New California's government, and the Empire retaliated by bombing population centres from orbit. A Federal Navy fleet commanded by Admiral Kracer arrived and drove off the Imperial forces, adding insult to injury.[2][3]

The Empire expelled Federal forces from Alioth in 2924 after it sent a fleet there to enforce the mining claims of the Durn and Resner Corporation. However, the Imperial fleet abruptly departed the following year, and Emperor Trasken Duval III seized Durn and Resner's assets without explanation. Sources in Federal intelligence later claimed that the incident was related to an Imperial cloning program that was intended to breed specialised infantry units.[4] Skirmishes continued sporadically through the end of the century, ushering in a particularly harsh economic depression that affected Gordonworld and New California.[2]

Emperor Gaylen Trasken Duval renewed hostilities against the Federation in 2994 in response to a series of provocations from the Federation that began in 2984, when President Grant Keller left office. Imperial agents were caught attempting to incite a revolution on Gordonworld, which resulted in the colonists leading a coup in 2995. Imperial soldiers then arrived on Gordonworld in 2996 to restore order, but the fighting entered a stalemate until 3001 when the Empire finally abandoned the moon. An Imperial trade embargo on Alioth persisted until Sirius Corp negotiated its removal in 3306.[5][2] The conflict over Alioth entered a lull in 3008, during which President Tyrell Biggs made a bid to grant Federal membership to Achenar and its subsidiary systems; some believed that the increase in distrust between the superpowers caused by the plan leaking to the public was Biggs' true goal.[6]

In 3184, Federal official Riley Dain was murdered in the system while investigating the abuse of gas mining quotas. President Loric Trander sent privateers to Alioth in response, and Emperor Hesketh Duval countered by deploying the Imperial XV fleet, instigating another conflict. This quietly ended in 3198, with neither side having accomplished anything of note.[7]

Rise of the Alliance

Perhaps the most momentous turn in Alioth's history began in 3228, when a revolt flared up after Federal corporations raised the prices of vital goods. Federal and Imperial forces attempted to quell the uprising, but met heavy resistance that was bolstered by the arrival of fighters from neighboring independent systems. The Empire withdrew first to avoid deepening its involvement in a war so far away from its main territory, and the Federation followed suit when the war stirred resentment among Federal citizens.[8] In 3229, the newly-liberated Alioth became a major hub for the robotics manufacturing industry.[9] In 3230, Mic Turner and Meredith Argent founded the Alliance in Alioth.[8] Gordonworld was renamed Turner's World, while New California was renamed Argent's Claim.[2]

During the week of August 31, 3305, the Garden City Gallery on Turner's World hosted a visual arts exhibition for the penultimate phase of the Alliance Festival of Culture.[10]

The Alliance purchased a controlling stake in ship manufacturer Lakon Spaceways in 3307. The corporation moved its administrative headquarters to Lakon Spaceways Central on Alioth 1 A on February 19, 3307, part of a wider relocation of Lakon personnel and resources to Alliance territory.[11]

The starport Donaldson was bombed by the Neo-Marlinist Liberation Army on March 11, 3307, along with starports in eight other major systems. Hundreds of thousands of people were killed in the Nine Martyrs attack, and many more were injured. The coordinated attacks occurred during the Galactic Summit in Sirius, and caused the conference to be cancelled.[12][13] 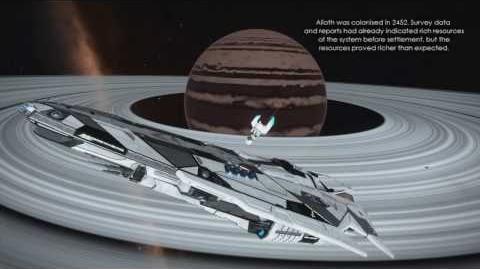