The Alliance Chieftain has been designed not only to dish out punishment, but to avoid it. Manufactured by Lakon Spaceways, the Chieftain is more manoeuvrable than ships of similar size and weight, and its combat profile means it can more than hold its own in a fight. The ship also boasts three internal military compartments, allowing the pilot to equip a shield cell bank, hull reinforcements and module reinforcements.

The Alliance Chieftain is a medium-sized combat ship manufactured by Lakon Spaceways through a partnership with the Alliance. The Chieftain is more maneuverable than ships of similar size and weight, allowing it to hit targets hard while avoiding counterattacks.[1][2] This was designed specifically to give the Chieftain an advantage against notoriously agile Thargoid vessels.[3]

The Alliance Chieftain is very competitively priced, at only 19 million credits it is significantly cheaper than other heavy fighters or multipurpose ships like the Python, Federal Gunship, Imperial Clipper, Krait MkII, Krait Phantom, and Fer-de-Lance, while boasting comparable capabilities. The ship also features many internal compartments, allowing the pilot to equip a shield cell bank, hull reinforcements or module reinforcements.[2]

Chieftain pilots may find it worthwhile to invest in one or more Module Reinforcement Packages, especially in PvP combat, as the Chieftain's thrusters and canopy are particularly vulnerable to focused attacks due to their large sizes and exposed locations.

The Chieftain performs very well against its intended match-up, the Thargoid Interceptor. It is capable of equipping the maximum of 4 Anti-Xeno hardpoints and has enough utility and internal space for countermeasures, such as Decontamination Limpets. Finally, the mobility lets it handle Thargon Swarms easily as it can keep a Remote Release Flak Launcher on its target. It is even capable of soloing Thargoid Interceptors in the right hands.

The Chieftain is also viable for non-combat purposes. It is a decent trader or pirate ship, as it has a maximum cargo capacity of 122T, which is well below average for a ship of its price but isn't exactly bad either. It is also a very good Mining ship with its medium and small hardpoints, good mobility, small body and cargo space. With 28ly of jump range, it can get around within inhabited space relatively quickly but makes for a poor exploration vessel.

Overall the Chieftain is an extremely powerful ship. Its biggest strength is its low price, making it accessible early and also much cheaper to upgrade to full potential. It is extremely good in combat roles like Pirating, Bounty Hunting and Thargoid Hunting while retaining some multipurpose functionality.

The Alliance Chieftain is most commonly available in Alliance systems. Despite its name and affiliation, it requires no rank or reputation with the Alliance to purchase.

All ships are highly customisable through the Outfitting menu of Station Services. Listed below is the default load-out for the Alliance Chieftain. 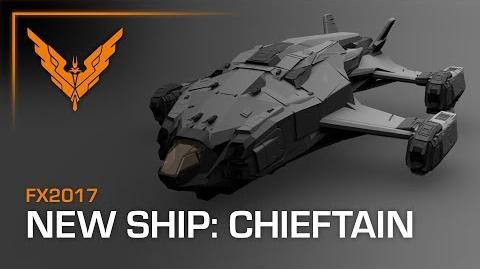 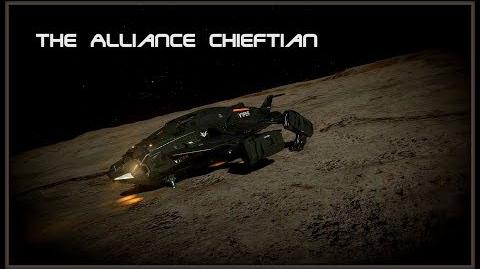 The Chieftain Elite Dangerous
Add a photo to this gallery

Alliance Chieftain in a station

Alliance Challenger and Chieftain and Crusader

Alliance Chieftain and a planet

Dorsal and ventral views of the Alliance Chieftain

Alliance Chieftain and Boeing 747
Add a photo to this gallery

Retrieved from "https://elite-dangerous.fandom.com/wiki/Alliance_Chieftain?oldid=126254"
Community content is available under CC-BY-SA unless otherwise noted.