Start a Wiki
watch 02:15
Elite Dangerous Lore: Ancient Ruins
Do you like this video?

For the second type of Guardian ruins discovered in February 3304, see Guardian Structure.

The Ancient Ruins are the remains of a species-wide, interstellar, faster than light communications network. It was built by the alien species known as the Guardians millions of years ago.[1]

The first Ancient Ruins site was discovered on October 27, 3302 by CMDR XDeath in the Synuefe XR-H d11-102 system.[2][3] Since January 3303, many additional sites have been located in other systems.

Ancient Ruins sites have so far been found to have three main topographical configurations, each of which has multiple minor variations in how alien structures like obelisks are arranged.

Gamma
Add a photo to this gallery

Note: All features are reset to their initial states when logging back in to the game.

Cairns consist of dark rocks surrounding an ancient artifact on a patch of ground that glows when approached in an SRV. They are detectable on the SRV wave scanner. The artifacts may be collected using the cargo scoop of an SRV or ship. (Destroying the surrounding rocks by shooting them may help.)

There are 6 types of artifacts in the cairns: Ancient Orbs, Tablets, Totems, Relic, Urns, and Caskets. Each can be scanned but this appears to have no effect. Artifacts can be sold at a market and their prices can be seen on the cargo screen of the right-side panel.

Pillars are tall structures that emerge from the ground when an SRV approaches. At the top of each is a glowing moving Ancient Relic surrounded by 3 pillars. The relic can be collected by shooting the pillars. Relics can be scanned but this appears to have no effect. Relics can be sold at a market and the price can be seen on the cargo screen of the right-side panel.

Obelisks are triangular prism structures grouped together in various formations such as rows, chevrons, triangles, and rectangles, bounded by ornate markings on the ground. Typically at least one obelisk within each group will glow and emit sound when approached in an SRV, and an animated pattern of symbols appears on the glowing face. This can be targeted and scanned to acquire encrypted data packages in various patterns: Alpha, Beta, Gamma, Delta, and Epsilon. Obelisks deactivate after scanning (until next game login).

When equipped with Ram Tah's decryption program (see History below) and holding the correct combination of artifacts(s) within the SRV cargo hold while scanning an obelisk, the data packages can be decrypted to reveal information about the Guardians' biology, history, culture, language, and technology. There are 101 data packges available, however only a limited number are available at any given ruins site. Multiple ruins sites must be visited to obtain all of the data packages.

Each obelisk is programmed with only 1 unique data package. The correlation between the ancient artifacts and Guardian information is as followsartifact/relic in the correct combination for that specific obelisk.

Example: the correct combination to decrypt data from a biology obelisk is one of:

* This is the base artifact that decrypts the data. This artifact must be in the SRV cargo hold either alone or with another ancient artifact/relic in the correct combination for that specific obelisk.

Beginning with the 2.2.03 update on January 10, 3303, Engineer Ram Tah provided a free decryption program to all ships that docked at any station in the Meene system, which allowed them to decrypt the data found at the ruins[4]. The program was only usable for 28 days after receipt, as the Guardians' technology had the ability to adapt to the decryption. Investigation of the ruins using the program in conjunction with specific combinations of salvage items revealed significant details about the history and culture of the Guardians. As only 36 of 100 possible data entries could be decrypted at the initial site, it was believed that the remaining entries were at other, undiscovered sites.

On January 24, 3303, Ram Tah announced that analysis of additional data provided by the galactic community[5] had allowed him to detect additional Guardian ruin sites. Although unable to discern their exact locations, he narrowed down the possible locations to four systems: Synuefe ZL-J d10-119, Synuefe XO-P c22-17, IC 2391 Sector ZE-A d101, and IC 2391 Sector GW-V b2-4.[6] All four sites were located by February 3, 3303.

On February 10, 3303, personal logs surfaced from a member of an expedition to locate the Guardians' origin world led by a Professor Melville. Melville was an authority on xeno-biology who had disappeared several months earlier. Theorizing that the Guardians had once occupied a volume of space roughly equivalent to the human bubble before being forced to migrate, and that at least hundreds of ruins sites existed, Melville gathered a cadre of supporters to attempt to find these ruins. According to the logs, the expedition discovered clusters of three ruins sites in each of three systems: Synuefe LY-I b42-2, Synuefe NL-N c23-4, and Synuefe TP-F b44-0. As of February 8, in the logs' final entry, Professor Melville had seized control of the expedition ship and cut off all communication to the rest of the galaxy.[7]

Following the news of the Melville Expedition's finds, the pace of new site discoveries rapidly increased as CMDRs began searching along the ship's path. Systems, and even planets, that held multiple sites were identified, lending credence to Professor Melville's theory that ruin density would increase closer to the center of Guardian civilization.

On June 23, 3303, CMDR Synjorai located Professor Melville's ship, a Megaship called The Cete, orbiting planet A 3 in Col 173 Sector LJ-F c12-0, a system that contained at least five ruin sites. The ship's logs, dated between January 13 and February 18, contain much of the same information revealed in the earlier transmission concerning Melville's theories on the Guardians, and also reveal why the ship never returned.[8]

Apparently, Melville's crew became concerned that Melville had gone insane and would not allow The Cete to return home, and decided to abandon him. Melville was to be left in the drive-less lab portion of the ship with several years' worth of supplies, while the crew departed in the detachable drive ship. However, Melville learned of this plan, shot one of his assistants, and sealed off the drive ship, trapping them all. The final log indicates that The Cete's atmospheric processors were deactivated long enough for the ship's oxygen supply to be completely depleted. Professor Melville and the crew presumably died of asphyxiation.[8]

On February 13, 3303, Ram Tah announced that he had made a significant breakthrough in how to detect Ancient Ruins sites. Using a signal isolated from the Guardians' monolith network, Ram Tah made it possible for all ship scanners to identify sites within a range of 1,000 light seconds, greatly reducing the time and difficulty involved in the location process.[9]

Over the next several months, more Ancient Ruins were discovered across the galaxy in isolated clusters. These clusters were smaller and found in distant nebulae thousands of light-years away from the region where the first sites were found. Significantly, these sites were also found in proximity to Brain Trees, implying they may be connected to the Guardians.

A list of Ancient Ruins sites is maintained by The Canonn here, and a 3D map of all systems with Ancient Ruins can be found here.

This is the first region where Ancient Ruins were discovered, and contains 113 sites. Listed below are the first 14 sites identified by CMDRs prior to Ram Tah's scanner upgrade, and the first 3 sites identified by Ram Tah's molecular analysis of Guardian objects. It is believed that this area, located to the east of Sol and the Core Systems, encompasses the Guardians' main territories and possibly their homeworld.

The original layout of the Ancient Ruins, before 2.2.03 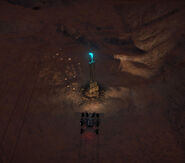 A tower has risen from the ground, containing an Ancient Relic

Flying low over the Ruins site

whole site area is like a shape or pattern.

A fighter flying low next to A group of Obelisks

SRV next to A obelisk with a blue prism like shape 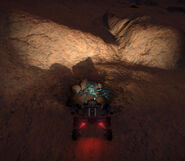 SRV next to a icosahedral Ancient Orb

SRV next to Obelisk

Obelisk Data
Add a photo to this gallery

Guardian Ancient Artifacts
Add a photo to this gallery

Retrieved from "https://elite-dangerous.fandom.com/wiki/Ancient_Ruins?oldid=129231"
Community content is available under CC-BY-SA unless otherwise noted.