The Beam Laser is an energy weapon that continuously emits a high-intensity laser beam for as long as it is fired or until it depletes its available energy capacitors. Beam Lasers are the most powerful of the three basic laser weapons, but also consume the most power, generate the most heat, and have the highest cost.

The Beam Laser inflicts thermal damage, making it very effective against shields and less effective against armour. Its maximum range is 3000m, but Damage Falloff begins after just 600m. Beam Lasers can be fired continuously for as long as sufficient weapons energy is available to feed them and siphon away the weapon's heat into the ship's cooling system. They are known for their high DPS compared to other lasers, at the cost of thermal waste and distributor draw.

A variant of the Beam Laser, the Retributor, is available as a Powerplay loyalty reward for Edmund Mahon supporters. 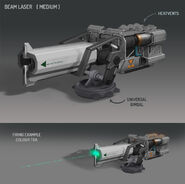 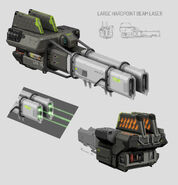