Not to be confused with Capital.

Capitol (originally designated Achenar 6d) is the capital world of the Empire. It is a terraformed moon that orbits the gas giant Achenar 6 in the Achenar system.

Multiple tourist beacons in orbit of the beautiful super-earth detail the history and origins of the Empire. For all intents and purposes, this planet is a second Earth, albeit 1.8 times as massive. This means the gravity is 40% stronger than on Earth, breeding sturdy people. It orbits the gas giant Achenar 6 in 823 earth days, however, rotates on itself in less than 18 hours. Though far from the giant it orbits, it is still eclipsed from the nearly indistinguishable Achenar star for a period of its orbit. The service-based Orbis space station Dawes Hub orbits this planet.[2]

The system of Achenar was chosen for the outdoor world orbiting one of its gas giants, already capable of supporting human life, now known as Capitol. There was already life on the planet and though Duval didn’t know it at the time, one of the few known sentient species watched their landings.

Back then, life was known to be plentiful throughout the galaxy, though it wasn’t appreciated how rare sentient life was. Before long the species was made extinct by the settlers, mainly through imported bacteria. Much later, this extinction would later be used as a pretext for Federal intervention in the system.[3]

Capitol was originally called Achenar 6D. It was discovered and colonized by a space expedition lead by Marlin Duval in the mid 23rd century. They established a colony which became the Republic of Achenar. This was later renamed to Capitol and changed into the Empire by her brother Henson Duval.[4][3]

These are notable locations. 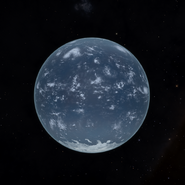