For personal weapons used by commanders while On Foot, see Handheld Weapon.

Each ship can equip a variety of energy, projectile, and missile-based weapons. Most weapons are available in either fixed, gimbal, or turret variants. Weapons are organized into classes ranging from 1 to 4 indicating their relative size (the higher the number the bigger the hardpoint must be to equip the weapon). Only the Cannon, Multi-Cannon, Pulse and Beam Laser, and Plasma Accelerator have class 4 variants whereas most other weapons have class 3 as their largest variant. In the outfitting store fixed weapons are indicated with a crosshair icon, gimbal weapons with a gyroscope icon, and turret weapons with a small turret icon.

Thermal weapons (lasers) have the benefit of unlimited ammunition, but they also tend to overheat your weapons systems more rapidly than Kinetic weapons do. Thermal weapons deal increased damage to shields and normal damage to a ship's hull.

Explosive weapons, such as missiles, torpedoes, and mines, are extremely ineffective against shields, but can inflict strong damage to a ship's hull. Explosive weapons have small and limited ammunition supplies, and can be shot down by Point-Defense Turrets. They are capable of being fired without adequate weapons energy reserves at the cost of extreme system heat, which can easily overheat your ship and do module and/or hull damage to your own ship. The explosive blast from Explosive type weapons is capable of damaging multiple ships if they are near the detonation point, which can easily cause "friendly-fire" problems if not used carefully.

These weapons use a charging capacitor and thus do not need ammo, but tend to drain weapon energy quickly and take time to recharge.

Kinetic-based weapons require ammunition to fire but generate less heat and consume less power as a result. Ammunition can be replenished at most stations or outposts. Kinetic weapons are good against hull, but are not as effective against shields.

Explosive Weapons require ammunition to fire. Most explosive weapons can be fired with insufficient energy in the weapons capacitor, but do so at the cost of extreme heat generation that is quite capable of reaching critical heat levels that may cause heat damage to your own modules and/or hull. Explosive Weapons are extremely ineffective against shields, but do greatly increased damage to hull.

Mining Tools are a subset of weapons designed primarily for mining asteroids, and are consequently ineffective in ship-to-ship combat. Like weapons, however, they must be installed in a ship's hardpoints.

Regardless of type, all weapons are placed in different mounts which determine how they aim at targets:

Fixed weapons are the most powerful of the three types, but have very little tracking ability - they shoot straight ahead, and can only do minor tracking of a few degrees (enough to converge on a target at most ranges) when the target is within the weapon's crosshairs. Because of this, fixed weapons depend heavily on your ship's manoeuvrability and your own aiming skills, but compared to other weapon mount types, they are cheaper, use less power, generate less heat, are not affected by chaff, and every weapon is available in a fixed mount.

Certain heavy weapons are only available in fixed mounts.

Every weapon in the game is available in a fixed mount, including standard, Powerplay faction locked, experimental, and mining tool weapons.

Gimballed weapons are mounted within a semi-flexible assembly which allows for limited pitch, yaw, and roll of the weapon within certain arcs limited by both the position of the mount and the actual assembly itself. Though they are not as flexible as Turrets, gimbal-mounted weapons can keep track of targets within a decently-sized cone directly in front of the mounting, making them a little easier to use than Fixed mounts. In exchange, gimbal weapons are usually weaker than their fixed counterparts and are vulnerable to chaff as it disrupts the weapon's ability to track the target.

When fired without a locked target, a Gimballed weapon will act as a Fixed mount instead, firing directly ahead. This can be used to partially bypass the scrambling effect of chaff; unlock the target and track/lead manually until the chaff effect ends.

The following weapons have gimbal variants:

Turrets are semi-independent auto-firing weapons that have a 360 degree range of fire. Standard turrets generally act autonomously, and do not require the hiring of an NPC crewman to act as a gunner. They must be part of the currently active weapon group in order to operate in either the Forward Fire or Targeted Enemy modes, otherwise they will not engage targets, even if they were previously activated.

Compared to Fixed and Gimballed weapons, Turrets are typically far more expensive (usually at least twice as expensive), turrets are in the middle of power consumption from all three weapon types, fixed being the least, and gimballed being the highest, however they have the lowest damage output. They can also be manually controlled by a human/player Gunner when using Multicrew functionality; the Gunner will take control of all Turreted weapons and select targets independent of the Helm, allowing ships to engage multiple separate hostiles.

Note: You can select one of three "Turret Weapon Modes" from the Functions tab of the Systems menu; it applies to all equipped turrets at once. The modes are;

The following weapons have turret variants: 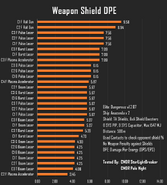 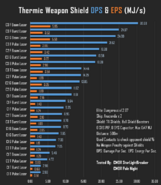