The Colonia Bridge is a four-part infrastructure project that was organised and funded by Brewer Corporation in cooperation with the Colonia Council. Divided into a series of seven Community Goals that took place between October 7, 3307 and March 10, 3308, the massive undertaking significantly expanded the number of stationary Wells-class Carriers and starports along the Colonia Connection Highway route between the Colonia Region and the Core Systems, increasing the ease of travel between the two regions. The Colonia Bridge officially starts in Alcor and terminates in Colonia.

Brewer Corporation announced the Colonia Bridge project and launched the first of its three planned phases on October 7, 3307. This phase involved collecting resources for the construction of up to 30 new Flight Operations Carrier megaships that would be stationed at 400-500 light-year intervals between the Colonia Region and the Core Systems. In addition to providing travelers with a wider selection of rest stops, the vessels would also be stocked with Tritium for the benefit of Fleet Carriers. Resource collection for the phase was hosted by Jaques Station in Colonia, and Macdonald Settlement in Alcor. Brewer Corporation assumed responsibility for producing up to 25 megaships, and it partnered with the Colonia Council to subsidise the final five.[1]

To bolster participation, Brewer Corporation pledged to offer discounts on Fleet Carriers and Fleet Carrier outfitting options in proportion with the amount of resources received by the initiative. In addition, the top ten participants in both Colonia and Alcor would be given the opportunity to submit potential names for the megaships.[1]

The first phase was proclaimed a success on October 14, and Brewer Corporation confirmed that all 30 megaships would be constructed and deployed by October 28.[2] Upon the successful launch of the megaships, Brewer Corporation scheduled the second phase of the project for the following week. There was one irregularity, however: the crew of CB-2 Memories of Oresrati in Snake Sector OD-S b4-2 reported receiving a distorted distress call on its long range sensors on October 29. Pilots scoured the area and found the signal's source at an abandoned settlement, Holloway Bioscience Research Facility 15 in the nearby Snake Sector GW-W c1-1 system.[3]

On November 19, the Tau Ceti Journal reported rumours that Brewer Corporation was making revisions to its plans for the project's third phase in response to the unexpectedly high participation rates in the first two phases. These rumours were bolstered by confirmation from an insider source that the corporation was manufacturing more modified Frame Shift Drives as incentives for phase three.[6] On November 26, after the deployment of the phase two megaships, Brewer Corp announced that phase three would begin on January 6, 3308, and would seek to build starports at key points along the Colonia Bridge route to establish permanent micro-communities. The final planned phase of the project also sought to increase Tritium supplies at Colonia Bridge ports, as existing quantities had proven insufficient for the needs of Fleet Carriers.[7]

The third phase of the Colonia Bridge project launched on January 6, 3308 as scheduled. Brewer Corporation revealed that this segment of the initiative would seek to construct up to six starports along the Alcor-Colonia route. The top five participants in Alcor and the number one participant in Colonia would be given the opportunity to name the starports, and the Class 3, 4, and 6 pre-Engineered Frame Shift Drives provided as bonus rewards in the second phase were also offered as rewards for the third. The starports were expected to be completed by January 27, and their services would be implemented at a later date.[8] As with the first two phases, phase three met all of its quotas.[9]

Upon the deployment of the six new Ocellus starports on January 28, Brewer Corporation surprised the galactic community by announcing the Colonia Bridge project would be extended with a fourth phase, scheduled to begin on February 10. This extra leg of the project was necessary to complete construction of the starports, which had been dispatched to their destination systems in an incomplete form, and furnish them with a wider range of services.[10]

Colonia Bridge's fourth phase saw a slight change in format when it launched on February 10, 3308. Instead of the usual week-long initiative, the phase was broken up into four initiatives that would take place over four weeks, with each part adding a different set of services to the six Colonia Bridge starports and giving participants a different reward. The first part of phase four added Universal Cartographics and Vista Genomics services to the starports, and offered pilots generous sums of credits. In addition, the top ten participants of every past and future Colonia Bridge initiative would be commemorated by having their names recorded in a series of Tourist Beacons.[11]

The second initiative, which began on February 17, planned to add Pioneer Supplies, Crew Lounge, and Search and Rescue services, and participants were promised a set of string lights for their ships' cockpits.[12] While the Alcor portion of this initiative met its quotas, supply constraints in the Colonia Region prevented the Colonia portion from doing the same, which meant that the second slate of starport services were not be added to Promium Relay in Eoch Flyuae QK-E d12-2118.

The third initiative to add Material Trader, Bartender, and Mission Board services to the starports began on February 24, and the bonus reward was a white engine drive color modification for both conventional ships and Fleet Carriers.[13] Both portions of the initiative accumulated enough deliveries to install Material Traders and Bartenders on the six starports, but the quota for Mission Boards was not met.

The fourth initiative of phase four and final overall initiative of the Colonia Bridge project commenced on March 3, 3308. The last services slated for implementation were Outfitting, Shipyards, and Technology Brokers. Furthermore, Brewer Corporation presented a second opportunity to install Pioneer Supplies on Promium Relay. Exclusive rewards for this initiative included pre-Engineered Power Plants and exploration-themed ship decals, and all pilots who had participated in any one of the Colonia Bridge's seven initiatives were also promised a Brewer Corporation ship decal as a token of gratitude from the megacorporation.[14]

The final initiative accomplished all of its quotas, allowing the Colonia Bridge project to conclude in triumph. Brewer Corporation CEO Madelyn Teague expressed her gratitude to contributors in a rare personal message, and noted that the Colonia Bridge's ports would support travel and trade between the Core Systems and the Colonia Region for decades to come. The top contributors in each of the project's seven initiatives were recorded in commemorative beacons that were placed in the Alcor and Colonia systems.[15]

All Colonia Bridge megaships and starports are controlled by the minor faction Brewer Logistics, a subsidiary of Brewer Corporation. 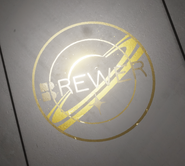