A variant burst laser that is designed to damage shields specifically at the cost of little to no hull damage.

Compared to its standard counterpart, the 1F fixed Burst Laser, it features a 60% higher ROF and 109% more damage leading to 236% more DPS. This comes at almost no cost in Mass, Distributor Draw and Thermal Load. The two downsides of this weapon are its range of only 1000m and especially the Armour Pierce Rating of 1. This means that it can only deal up to 5% of its Damage against hulls in the best case, which leads to why it is a weapon only used against shields.

The weapon has 1.7° of jitter, meaning that at its maximum range of 1 km it can just land all its shots on the broad top or bottom of an Asp Scout. The reduced damage against smaller ships is balanced by their weaker shields.

This weapon can be purchased once the player has pledged their allegiance to Archon Delaine for 4 or more weeks and has achieved a rating of rank 3 or higher. 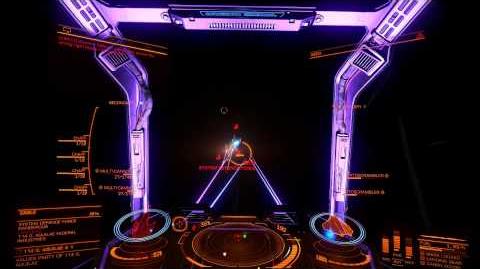