A Detention Centre, also known as a Judicial Facility, is a type of Flight Operations Carrier Megaship where criminal pilots are detained and forced to either pay off their accumulated fines and bounties or accept bankruptcy before they can be released.

When Security Forces detect criminal fines or bounties on a ship and then destroy it, the ship's pilot is apprehended and transferred to the nearest Detention Centre with jurisdiction. Crimes committed in independent systems are handled by Detention Centres under the Independent Detention Foundation; Federation systems are handled by the Federal Internment Corporation, Empire systems by the Imperial Detainment Company, and Alliance systems by the Alliance Incarceration Concern.[1][2]

There are a total of 36 Detention Centres in operation across the galaxy as of May 16, 3305. 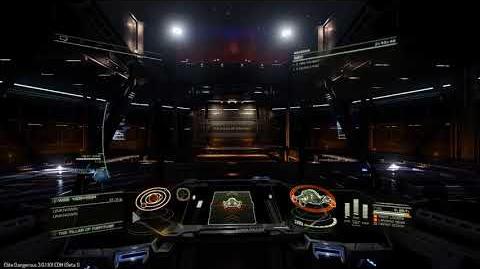 The Shield of Resolve

Grim Pioneer
Add a photo to this gallery

Retrieved from "https://elite-dangerous.fandom.com/wiki/Detention_Centre?oldid=126227"
Community content is available under CC-BY-SA unless otherwise noted.