Fleet carriers are massive ships fitted with multiple hangar bays, functioning as a mobile base of operations. Services offered by a fleet carrier can be fully customised by the fleet carrier's owner; this includes the traded commodity types, available outfitting modules and the contents of a shipyard. Manufactured by Brewer Corporation, these remarkable craft offer significant advantages in all professions. Unlike single-pilot vessels, carriers require a dedicated budget to cover weekly expenses. A unique interface allows owners to easily manage their fleet carrier, covering all aspects of operation from a single screen.

The Drake-Class Carrier, also known as the Fleet Carrier, is a Capital Ship manufactured by Brewer Corporation. It is the largest and most expensive vessel available to independent pilots for purchase. It features a total of 16 Landing Pads to accommodate other conventional ships, and is jump-capable, allowing it to act as a mobile base with much of the functionality and services of a typical Station.

Drake-Class Carriers are a model of Capital Ship designed to serve as Carriers for fleets of smaller ships.[1] Pilots are restricted to owning only one Fleet Carrier each, and instead of piloting it directly as with conventional ships, they can command it to jump between different locations.[2][3] The main feature of the vessels is their Landing Pads, which can provide many of the same services as conventional Stations, including Refuel, Repair, Rearm, and more depending on what the vessel's owner has funded. The owner can store their own ships and modules at all times, but must install the Shipyard and Outfitting services to extend storage to visitors. Each Fleet Carrier possesses 16 total Landing Pads: 8 large, 4 medium, and 4 small. The owner controls the docking permissions, and can restrict who may dock. The vessels also have a total cargo capacity of 25,000 t, which is used both to store commodities and hold the infrastructure necessary for various optional services, a total fuel capacity of 1,000 t of Tritium, and 20 defence turret emplacements.[1][2][3][4]

Like the Farragut Battle Cruiser and Majestic Class Interdictor, the Drake-Class Carrier is equipped with a Capital Ship-class Frame Shift Drive, allowing it to jump between star systems. It has a maximum jump range of 500 ly, can travel anywhere in the galaxy with the exception of permit-locked systems, and the owner can schedule a jump for any time that they wish.

In order to undertake a jump, the ship must be supplied with a certain amount of a fuel called Tritium, that can either be purchased from Commodity Markets at Starports with a Refinery economy or mined from surface and sub-surface deposits on icy asteroids.[5][1] The amount of Tritium fuel consumed by a given jump depends on the distance of that jump and the vessel's current mass.[6] A Fleet Carrier with no optional services installed and a completely empty cargo hold will consume approximately 135 units of Tritium for a 500 ly jump.

Jumps can be plotted through both the Galaxy Map and the System Map, and the destination system must be within the Fleet Carrier's maximum jump range. If the Galaxy Map is used, the vessel will arrive at a random body in the selected system. If the System Map is used, the owner can select a specific body within a system as the destination. Plotting through the Galaxy Map can be done regardless of whether the system has been charted or not, while plotting through the System Map is only an option if the system has been charted. Be aware that it is possible to jump a Fleet Carrier to a system it may not be able to depart from due to insufficient fuel. Also, every jump that the Fleet Carrier performs inflicts a small degree of wear and tear on the vessel, which incurs an additional fixed maintenance fee of 100,000 credits per jump that must be paid alongside other upkeep costs.[2][3]

Once the owner schedules a jump, there is a 15-minute preparation period immediately preceding the jump, followed by a 5-minute cooldown period after the jump completes.[7] During the preparation period, the Fleet Carrier broadcasts a system-wide announcement notifying local pilots of the imminent jump, and a signal source appears in the destination system to mark where the Fleet Carrier will arrive. The owner retains the option to cancel the jump until 3 minutes and 20 seconds before departure, at which point the Fleet Carrier enters pre-flight lockdown: all services are temporarily suspended, docking requests are no longer accepted, and Landing Pads are retracted inside their hangars. Final departure preparations and the jump itself consist of seven phases indicated by the HUD:

During the post-jump cooldown period, another jump cannot be initiated, but the lockdown is lifted, services are restored, and Landing Pads resume operations. When a Fleet Carrier jumps, any active pilots in its vicinity can witness its departure, and any active pilots at the destination signal source can witness its arrival. Pilots who docked with the vessel before the pre-flight lockdown will jump with it, but unlike jumping with a conventional ship, they will have no view of hyperspace during the jump.[7][2][3]

The owner can pay for upkeep directly from their available credit assets, and also with an income that can be generated from the vessel's available services, including refueling and the commodity market, by setting tariffs. The owner can raise or lower tariffs between 0-100% at any time in the Fleet Carrier Bank, a menu where all of the vessel's finances are managed by the owner and funds reserved for its expenses are stored. Any pilots other than the owner who use Fleet Carrier services with tariffs will consequently pay more for those services than at Starports, and the owner can use the profits to fund upkeep. Income raised by tariffs is dependent on how many pilots use the Fleet Carrier's services, and consequently Fleet Carriers stationed in high-traffic systems are more likely to generate more income.[2][1]

When upkeep costs are not paid, the Fleet Carrier will go into debt. Indebted vessels will automatically suspend all optional services to reduce expenses until the debt is fully paid. After the owner pays off the debt, they must manually reactivate those services.[2][1]

When the owner of a Fleet Carrier fails to regularly pay upkeep costs and their debt exceeds 250 million credits, equivalent to 10 weeks of debt with all optional services installed,[7] the owner will have one week to resolve their finances or their Fleet Carrier will be automatically shut down and slated for decommissioning and scrapping, at which point it can no longer be recovered by paying off its debt. Alternatively, in the event a Fleet Carrier owner no longer wishes to maintain their vessel, they can choose to decommission it themselves at any time. Individuals who have their Fleet Carriers decommissioned for any reason are never barred from purchasing another Fleet Carrier.[2][3]

When a Fleet Carrier finally enters "decommissioned" status, it is taken over by a recovery crew and dismantled. If any modules and ships were left aboard the Fleet Carrier at the time is was dismantled, they will be automatically transferred to the nearest Starport with the Carrier Construction service for free.[3] Lastly, the owner is refunded the full cost of their Fleet Carrier and any installed services, minus any unpaid debt in cases of automatic decommissioning or a fixed fee of 125 million credits in cases of voluntary decommissioning.[4]

All Drake-Class Carriers provide a selection of services for pilots who dock with them. Beyond the vital core services, the owner can decide which additional services to bring online and fund based on their cost, how much of the vessel's 25,000 t cargo capacity they will occupy, and whether or not they are suited for the role the owner envisions.[2][1]

Newly-purchased Drake-Class Carriers include three core services that remain active at all times. Core service crews are paid from the 5,000,000 credit base upkeep fee.[2][1]

Once optional Fleet Carrier services are installed, they are automatically activated and will incur the full upkeep cost for running them. The owner can suspend optional services to reduce upkeep; the crews for any suspended services remain aboard the vessel and must still be paid a retainer fee. The only way to completely eliminate an optional service's upkeep is to uninstall that service.[2][1]

Drake-Class Carriers also have a number of non-service features that aid owners and visitors. These do not contribute to upkeep costs.[2][1]

Drake-Class Carriers are available for purchase from select systems.[5] Starports that sell them are visually signified by a Carrier Construction Dock stationed a few kilometers away, and feature the Carrier Construction service in their Starport Service menus under Contacts. Once a Drake-Class Carrier is purchased, the owner can find it orbiting within the system, or the nearest available system with the Carrier Administration service if the purchasing system is already at capacity.[2][3]

Fleet Carrier Odyssey
Add a photo to this gallery 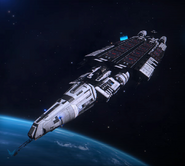 A screenshot of a Fleet Carrier from the July 2019 reveal

The first high-definition image of the Fleet Carrier

A Fleet Carrier and a Type-7

A Type-7 departing a Fleet Carrier

A Mamba on a Fleet Carrier Landing Pad

A Drake-Class Carrier with a set of livery modifications

A Drake-Class Carrier with a second set of livery modifications

A Drake-Class Carrier with a third set of livery modifications

Retrieved from "https://elite-dangerous.fandom.com/wiki/Drake-Class_Carrier?oldid=132905"
Community content is available under CC-BY-SA unless otherwise noted.