The Dredger is a class of Bulk Cruiser Megaship last known to be manufactured in the 31st century. This ship has a design that utilizes a large intake and grinder mechanism on its bow to draw in both natural materials and manufactured objects, then break them down and syntheisize the products into fuel, air, and other vital resources. This also means Dredgers must constantly seek out new sources of raw materials and salvage to maintain themselves, or risk suffering mechanical failures. Advancements in hyperdrive and Fuel Scoop technology have rendered this design obsolete, but Dredgers can still achieve a jump range similar to modern fleet carriers. Dredgers that are still in operation in the 34th century were acquired centuries or decades earlier by nomadic Dredger Clans, who keep the vessels operational and use them in a similar manner as Generation Ships. Tens of thousands of clan members may inhabit a single Dredger, and each clan typically possesses its own eccentric culture. Depending on the clan running it, a Dredger passing through an inhabited system may only furtively scavenge local detritus, or carry out aggressive raids on unprotected outposts.[1][2][3] 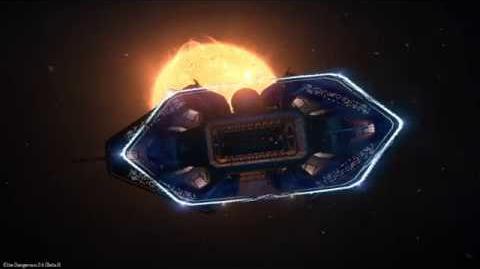 The reveal image for Dredgers pre-2.4

The maw of The Scriveners Clan Dredger