The Emperor is the head of state and head of government of the Empire. The reigning Emperor is Arissa Lavigny-Duval of the Imperial Family. Emperors reign for life, and they alone hold the power to designate or disqualify heirs, and appoint Senators and Chancellors.

In the event that an Emperor becomes unwilling or unable to rule, their duties are assumed by their Chancellor. In practice, a number of Emperors throughout the Empire's history have relegated much of their responsibilities to their Chancellors.[4]

After the death of the Achenar colony's founder, Marlin Duval, in 2296, her brother Henson Duval took over its administration and immediately began transforming the Republic of Achenar into the Empire.[5] Henson's first act was to disband the council and assume sole responsibility for the leadership of the Achenar colony. He rejected the Federation's requests that the colony join them, and declared that the leadership of the colony, and any affiliated systems, would be hereditary passed down from father to son. In 2320, Henson Duval was formally crowned as the first Emperor of the Empire.[6]

Henson's restructuring of Achenar's government into a monarchy gave rise to a counter-ideology among his detractors known as Marlinism. The core tenet of Marlinism was that the position of Emperor should be abolished and replaced by a representative system of elected senators. Marlinism became widespread throughout Imperial fringe systems and remained a minor yet persistent presence in Imperial politics by the 34th century. A radical offshoot of Marlinism called Neo-Marlinism also eventually emerged; it shared the main goal of Marlinism, but asserted that terror tactics were the only feasible way to achieve that goal. Neo-Marlinist groups such as the Neo-Marlinist Liberation Army also held a particular hatred for the Imperial Family.[7]

Early in the reign of Hengist Duval, the 15th Emperor changed the laws of succession so that daughters of the Imperial line would also be able to ascend to the throne.[8] The Senate later determined that the title "Emperor" should be used for both male and female rulers.[9]

After the assassination of Hengist Duval in 3301, there was no clear successor to the Imperial Throne, because Hengist had disqualified his son, Prince Harold Duval, from the line of succession only the year before. This left the choice of who would be crowned the next Emperor entirely to the Imperial Senate. Chancellor Anders Blaine was widely considered the strongest candidate for the throne, but the revelation of his indirect connection to Emperor's Dawn left Princess Aisling Duval and Senator Arissa Lavigny as the most convincing contenders.[10] Arissa Lavigny had previously declared that Prince Aristide Lavigny was not her biological father, and that she was the illegitimate daughter of Hengist Duval. This made her claim to the throne stronger than Aisling Duval's, since Aisling was Harold's illegitimate daughter.[11] Senator Denton Patreus was also briefly thought to be vying for the throne after he opined that the Emperor should be chosen based on merit rather than bloodline, and Senator Zemina Torval signaled her support for Patreus when she asserted that Patreus was the most popular Senator among the citizenry.[12][13] In the end, the Imperial Senate voted to elect Arissa Lavigny-Duval as the next Emperor. She was crowned in the Imperial Palace as the 16th Emperor of the Empire on October 18, 3301.[9]

The Emperor is the sovereign ruler, head of the Empire and above the law. The Emperor can sit in the Imperial Senate, declare the opening and closure of each Senate session, declare the Senate's agenda, impose rules and regulation for the Senate to follow, and meet with foreign ambassadors in the name of the Senate. The Emperor can appoint Senators and Chancellors, and hold them accountable.[2] It is the Emperor's duty to ensure the success of the Empire and its continuation long into the future.[14]

The Imperial succession is generally hereditary, provided that there is a suitable candidate who is acceptable to the Imperial Senate. In almost all cases, this has meant that the Imperial Throne has passed directly from father to son. In the rare event that there is not a clear line of succession or designated heir at the time of an Emperor's death, then the duty of deciding who will rule the Empire falls to the Imperial Senate, which is allotted a one month period of debate to select a candidate in accordance with centuries of law and tradition. At minimum, the Senate's candidate must be of royal blood or of royal marriage. At the end of the succession selection period, the Senate's 1,000 members will then vote on whether to elect the candidate as Emperor, which requires a clear majority approval in the final count.[3]

If an Emperor becomes incapacitated for any reason, their appointed Chancellor has the authority to rule the Empire in their stead, either until their incapacitation is determined by that Chancellor to be permanent or they die.[15]

Imperial law mandates that all Imperial citizens, including the Emperor, must announce their intent to marry a minimum of 30 days in advance of the ceremony. During this period, legal objections to the marriage can be filed with the Office for Marriage by relatives of the couple. An objection is reviewed in a hearing of the Marriage Council, which will issue a ruling on its validity.[16][17][18] An objection cannot be lodged more than once by the same person.[19]

The wife of the Emperor receives the ceremonial title of Empress Regent.[20][21] Should Emperor Arissa Lavigny-Duval marry, it is assumed her husband would be known as the Emperor Regent.

The Imperial Palace on Capitol is the official residence of the Emperor. It is one of the great manufactured interstellar marvels of our age.[22] The emperor can make important statements and speeches in the palace or occasionally on the steps. Imperial marriage, mourning, procession and crowning are held there.[9][23]

The Imperial Guard are assigned to protect the Emperor, certain senators, and the Imperial Palace.[9]

The death of an Emperor is followed by a four-week official mourning period during which they lie in state inside the Hall of Martyrs on Capitol for public viewing. As this draws millions of mourners from across the Empire, not all of them will have the chance to view the body in-person. Imperial officials also traditionally wear black sashes for the duration of the mourning period. The day after the mourning period concludes, a state funeral and procession are held. The coffin is carried by the Imperial Guard through the city of Capitol and followed by the Emperor's spouse, then immediate family, Senators, Patrons of high status with direct connections to the Emperor, Clients, citizens, and lastly the Emperor's favourite Imperial Slaves, who are traditionally set free at the end of the funeral. The Emperor is finally interred in the Hall of Martyrs in a private ceremony, where attendees burn their black sashes, while citizens across the Empire partake in the Feast of Remembering.[24][25][26][27]

These styles are visible below and above the Access Corridor of Imperial stations. Imperial sympathizers occasionally do the act of basking.[28] 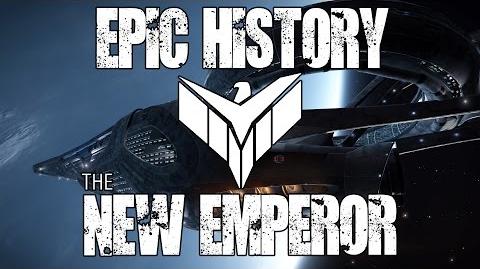