FSD supercharging is the process of flying into one of the high-energy relativistic jets of a neutron star or a white dwarf in supercruise with a Fuel Scoop equipped. This allows a ship to take in exotic particles that interact with its Frame Shift Drive to increase its maximum jump range for a single jump, but also inflicts a small amount of damage on the Frame Shift Drive. FSD supercharging from a white dwarf gives a 50% (1.5x multiplier) range bonus, while doing the same with a neutron star provides a 300% (4x multiplier) bonus, effectively quadrupling a ship's range for a single jump. Note that supercharging is not an instant process, and pilots may have to spend several seconds inside the jet for the effect to apply.

This is a risky process, as the high-energy jet of the star can fling the ship around and make it difficult to control. Entering the jet will make the ship somewhat difficult to control: the magnetic forces of the jet will tug on the ship gently, not unlike the way an Frame Shift Drive Interdictor would affect a ship. Larger ships with greater mass are somewhat resistant to the jet's magnetic forces and can be easier to control during the process than smaller ships.

Disengaging supercruise while inside the jet is almost always lethal: the relativistic jet's sheer energy output will inflict damage to a ship's modules and hull, rendering almost all of them inoperable within a couple of minutes of initial exposure. Neutron star exclusion zones are relatively small, so running into it is not much of a concern; however, white dwarfs have a much larger exclusion zone and will catch an unwary commander off guard quite easily. Thus, it is not recommended to use white dwarfs for FSD supercharging, as the risk is generally not worth the lower 50% FSD range boost.

Independently-charted Neutron Highways can be used to traverse vast distances with far fewer jumps than the conventional method of travel. These routes usually involve using the supercharge acquired at one neutron star to jump directly to another system with a neutron star or close to it, and thereby chain supercharged jumps almost indefinitely until the destination is reached, provided the pilot can keep their FSD repaired and refuel with standard fuel scooping when necessary. 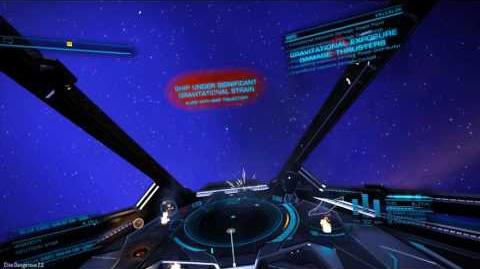 Elite Dangerous 2.2 Beta - Dropping into a neutron star jet
Effects of gravitational strain as experienced in the Eagle... 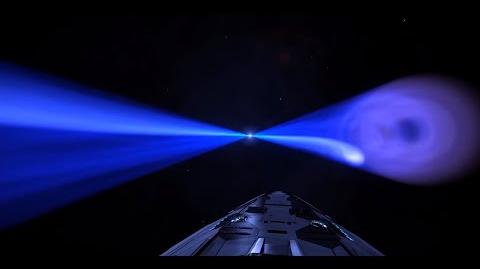 Neutron star and an Anaconda

A neutron star near a Class B star
Русский 中文
Community content is available under CC-BY-SA unless otherwise noted.
Advertisement