Core Dynamics Farragut-Class Battle Cruisers represent the cutting edge in military technology. A single FCB can carry several squadrons of Federal Fighters and multiple Federal Corvettes across hundreds of light years without any difficulty. These deep deployment capabilities, coupled with extraordinarily heavy firepower, practically guarantee that a single FCB will completely overpower all but the most well-equipped opponents.

The Farragut-Class Battle Cruiser is a battlecruiser manufactured by Core Dynamics exclusively for the Federation. As a capital ship, it serves as the backbone of the Federal Navy and the core of each of its fleets. In contrast with its Imperial Navy counterpart, the Majestic-Class Interdictor, the Farragut emphasizes utility over style and comfort, and in a direct, one-on-one confrontation with the Imperial capital ship, the Farragut holds the advantage in terms of raw firepower and combat endurance.

The Federation's capital ships are brutal, practical war machines inside and out. Airtight doors split the interior into many separate compartments. Grab-handles abound, as do access panels and all the paraphernalia of a military vessel. There would be no mistaking a Federal ship's interior with an Imperial one.

— The Art of Elite Dangerous[2]

The Farragut-Class Battle Cruiser is over two kilometers long, heavily-armed with classified weaponry, and equipped with hangars capable of transporting multiple Federal Corvettes and F63 Condor squadrons. It is equipped with a capital-class Frame Shift Drive[3] with an undisclosed jump range. The Federal Navy uses the Farragut as an integral part of its Intervention Fleets, which are used to investigate and intervene in larger-scale conflicts.[4]

From 3278 to 3302, the construction of Farragut-Class Battle Cruisers as well as other capital ships was restricted by the terms of the London Treaty, which was created to prevent an arms race between the superpowers that was projected to occur with the introduction of the Frame Shift Drive. Imperial Senator and Fleet Admiral Denton Patreus publicly spurned the London Treaty on October 21, 3302 in a speech in which he declared he would build as many capital ships as the Empire needed for its defence, marking the Empire's withdrawal from the treaty and heralding its dissolution.[5][6]

Since the outbreak of the Second Thargoid War in 3303, multiple Farragut-Class Battle Cruisers have been destroyed by Thargoid Interceptors due to the former's vulnerability to Thargoid shutdown fields. Since the anti-xeno countermeasures developed for smaller ships have proven prohibitively difficult to scale-up for capital ships, the international research and defence organisation Aegis has declared that capital ships are ineffective at protecting outposts, planets, and shipping lanes from Thargoid attacks at present. Instead, anti-Thargoid efforts have been spearheaded by militias of personal-scale craft.[7][8]

During a period of increased tensions between the Federation and the Empire in late 3306 caused by the activities of the Neo-Marlinist Liberation Army, President Zachary Hudson convinced Federal Congress to approve a funding increase for the Federal Navy in order to expand production of Farragut-Class Battle Cruisers.[9] With assistance from independent pilots, this resulted in five new Farraguts being fast-tracked for completion, with planned deployments in Atropos, Iman Caber, LHS 142, LFT 367, and Wolf 25.[10] 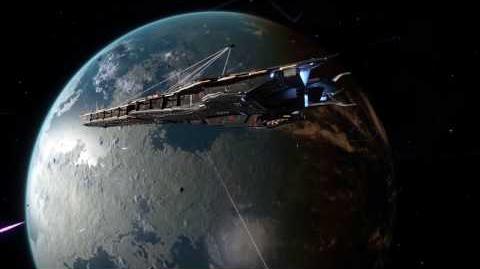 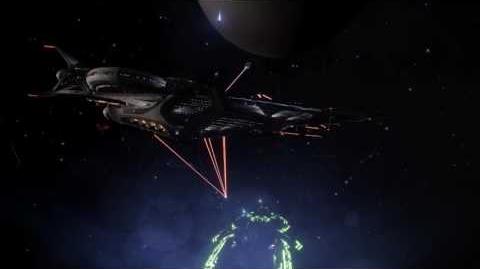 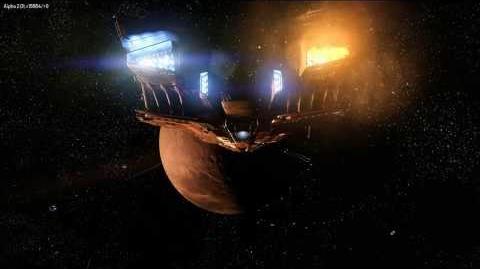 Elite Dangerous - The Arrow of Time 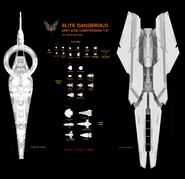 Farragut-Class Battle Cruiser near the surface

FNS Pioneer from inside an Anaconda

INV Law of Achenar at a Conflict Zone

View from inside the front super-structure

View from behind the bridge on top

Side-view and inside the Farragut