Based on the Federal Dropship, the Federal Assault Ship sacrifices the flexibility of its sibling in favour of a more combat-oriented profile. Faster and more manoeuvrable than the Dropship, and boasting two medium and two large hardpoints, this is a vessel that has been designed to strike fast and hard. The trade-off for this power and agility is a reduction in internal compartments, making the Assault Ship less versatile than the Dropship.

The Federal Assault Ship is a ship manufactured by Core Dynamics for the Federation. Purchasing it requires achieving a Federal Navy rank of Chief Petty Officer. It is a combat-specialised variant of the Federal Dropship, gaining improved speed and manoeuvrability without compromising firepower or defence.

The Federal Assault Ship's agility comes at the cost of fewer Internal Compartments, which makes it more of a fighter than a true multipurpose ship.[1][2] Like its sister vessels the Federal Dropship and Federal Gunship, the Assault Ship has weak shields but a resilient hull, which has given the three models a reputation as "hull tanks".

One notable advantage that the Assault Ship has over the Dropship and Gunship is its jump range potential: of the three ships, the Assault Ship can jump the furthest with a lightweight loadout. This makes the Assault Ship an interesting choice for explorers, because although its internal compartment layout is not especially spacious and it cannot achieve the high jump ranges of exploration staples such as the Asp Explorer, its rugged design specs mean it can survive a stronger beating than typical exploration ships. It is not recommended for long-range expeditions, but may be suitable for trips to relatively high-traffic attractions close to the bubble, such as the Pleiades Nebula, Witch Head Nebula, and Thargoid-occupied systems, where the risk of explorers being drawn into combat is higher.

All ships are customisable through the Outfitting menu of Station Services. Listed below is the default load-out for the Federal Assault Ship. 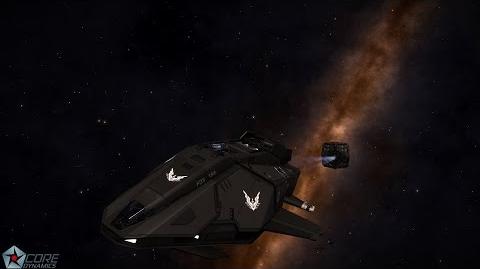