Developed by Core Dynamics, the Federal Dropship is a versatile combat vessel widely used by the Federal Navy. Boasting one large and four medium hardpoints, the vessel can contend even with larger ships such as the Python, while its two military compartments allow the pilot to enhance the ship's defensive profile.

The Federal Dropship is a military ship produced for the Federation by Core Dynamics. Pilots must earn the rank of Midshipman with the Federal Navy before they are permitted to purchase it. The Federal Dropship has excellent hardpoint placement, and is known for its ability to remain functioning even when the hull is at very low integrity thanks to its module protection.

The Federal Dropship is generally available for purchase at Stations controlled by minor factions that are aligned with the Federation. Systems controlled by Federal President Zachary Hudson are guaranteed to have the Dropship on hand, along with other Core Dynamics vessels. Its body shape and design is shared with the Assault and Gunship, sometimes making it difficult to tell them apart at a glance. The Dropship is the cheapest of the three and the lowest needed federal rank.

The Dropship is a very good combat vessel. Featuring a large hardpoint and 4 medium hardpoints it has no trouble dealing with ships lower than its price and can put up a good fight against even higher tier ships like Pythons. Furthermore, the Dropship has above average armour as well as two military compartments for extra defense making it bulky. It suffers from low shielding and has rather poor mobility so it is poor against nimble ships like Vultures. Overall the Dropship is a respectable ship for both a Bounty Hunter or Pirate.

As a Trader, the Dropship has 164T of space to haul cargo. This is very good for a medium ship; and is the fifth best of all non-large ships. Combined with its impressive defense, even when unshielded and ability to easily dodge interdictions the Dropship can be a very appealing trade ship. The biggest downside is its very low jump range, especially when fully laden which may make trade options very limited.

As an explorer, the dropship is notorious as one of the worst ships in the role with a poor jump range of 19.66LY or so, the second lowest jump range in the game, being only a fraction higher than the Federal Gunship. Needless to say, the Dropship is a poor choice as an exploration vessel and its terrible jump range can make both trading and chasing bounties very cumbersome, especially as the ship will be weighed down further with combat modules or cargo. Engineering the Dropship is almost mandatory.

The Dropship is an excellent miner. 4 Medium hardpoints for one of each mining tool, while retaining a large hardpoint for self defense, small size, great cargo space and good defences make the Dropship a fantastic miner and can be a miner's next stepping stone after the Keelback. Its only downsides are its lack of an SLF and its terrible jump range, which can make reaching specific mining points tricky.

Overall the Dropship sacrifices some combat aspects to be better at trading and mining. The biggest downsides the ship suffers are its miserable jump range and its required federation rank. However, its price tag lets it be a good stepping stone ship, as there are no other medium ships in its range without required military ranks.

All ships are highly customisable through the Outfitting menu of Station Services. Listed below is the default load-out for the Federal Dropship. 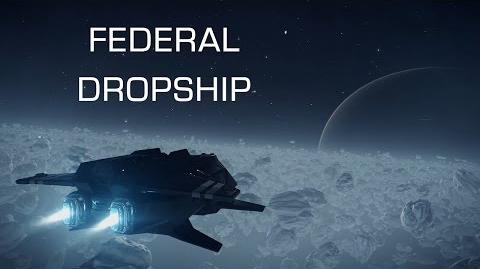 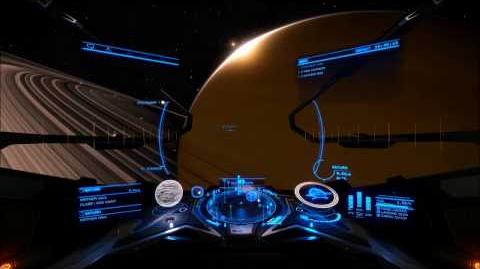 The Federal Dropship Elite Dangerous
Add a photo to this gallery

High Res Screenshot of a FDS in a Coriolis Hangar

FDS on the hunt for pirates

Federal Dropship with Midnight Black paint in a planetary ring

Federal Dropship and a planet

Federal Dropship and a planet

Core Dynamics Federal Dropship art
Add a photo to this gallery
Retrieved from "https://elite-dangerous.fandom.com/wiki/Federal_Dropship?oldid=128207"
Community content is available under CC-BY-SA unless otherwise noted.