There are 14 ranks in the Federal Navy Auxiliary, which can be joined by any independent pilot. As pilots rise through the ranks, they are rewarded with access to exclusive Federal ships, missions, and restricted system permits.

For players to be promoted through the Federation's ranks, they must complete missions or other favourable activities with minor factions aligned with the Federation. Progress toward the next rank is tracked in the right HUD panel, in the Reputation section of the Status tab.

Finding a system that best offers these opportunities can be difficult due to faction states changing constantly and a need for the minor factions to be aligned to the relevant superpower. 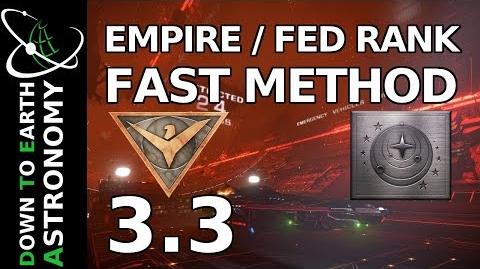 Fast Empire and Federation Elite Dangerous guide!
Add a photo to this gallery
Retrieved from "https://elite-dangerous.fandom.com/wiki/Federation/Ranks?oldid=134794"
Community content is available under CC-BY-SA unless otherwise noted.