The Fer-de-Lance is a heavy combat ship manufactured by Zorgon Peterson. With four medium and one huge hardpoint, the ship is a veritable powerhouse, able to mount a challenge even to the Anaconda and Federal Corvette. If the vessel has a drawback it is that it is highly specialised - consumers are advised that the Fer-de-Lance Is unsuited to activities other than combat.

The Fer-de-Lance is a heavy combat ship manufactured by Zorgon Peterson. It features a hull that is more resistant to damage from Class 1 and 2 weapons than other medium ships,[1] and alongside its newer sister ship, the Mamba, it is one of only two medium ships capable of mounting Class 4 weaponry. Although fast, manoeuvrable, well-armed, and well-shielded, the Fer-de-Lance suffers from a few significant drawbacks: poor jump range, a small fuel tank, and a limited number of internal compartments for its size. This makes the Fer-de-Lance difficult to recommend for any role outside of combat.

The Fer-de-Lance is outstanding in its role as a combat vessel. Its damage output is among the highest of all medium sized ships thanks to its high number of hardpoints including one Class 4, which have excellent convergence when firing allowing the use of fixed mounts on all of them. Among medium sized ships, only the Federal Gunship, Python, Krait MkII, and Mamba can compete with the Fer-de-Lance in terms of firepower, although the Fer-de-Lance is more manoeuvrable, meaning in practice it is usually more capable of dishing out damage than the others. This does not take Ship-Launched Fighters into consideration, a capability that the Federal Gunship and Krait MkII possess while the Fer-de-Lance does not. The Fer-de-Lance is also less agile than the Alliance Chieftain and Federal Assault Ship, but still has the advantage in firepower over them.

In combat, the Fer-de-Lance excels against all opponents, from larger ships to Thargoid Interceptors. It is widely considered one of the best ships for taking on skilled human pilots, more so than the Anaconda and Federal Corvette. The Imperial Cutter only poses a challenge to the Fer-de-Lance due to the Cutter's superior firepower and shielding, but the Fer-de-Lance still has the advantage in speed and agility.

The Fer-de-Lance is reliant on its shield for defence. Its base shield is by far the highest of all medium sized ships, and it has 6 utility mounts compared to the average 4 on most medium sized ships, allowing it to install more Shield Boosters for even more protection (since shield boosters increase shield by percentages, they are also more effective on the Fer-de-Lance than on ships with lesser shields). The result is that Fer-de-Lance builds can exceed 1000MJ of shield even without engineering, but with engineering it can reach over 2000MJ. The Fer-de-lance's armour is comparably mediocre, as its base armour is not quite as durable as the Federal ships, the Alliance ships, or the Python, and its abysmal optional internal compartments leave little room for Hull or Module Reinforcement Packages.

The Fer-de-Lance's sole weakness in combat is its low mass lock factor of 12, meaning it will not be able to mass lock any medium combat ships aside from itself and the Mamba, or any large ships other than the Imperial Clipper. Consequently, the Fer-de-Lance makes for a poor pirating vessel since, in addition to its limited cargo capacity, it is relatively easy for most other ship models to either escape from it or interdict it.

The Fer-de-Lance is specialized in its role as a fighter and is virtually unusable in any other role. Its jump range falls just short of 21 ly without engineering, the fourth lowest of all available ships, making it one of the least suitable vessels for exploration. It cannot effectively chase targets across the bubble or hunt down bounties, and will have serious trouble jumping away to the nearest Interstellar Factor to clear its own bounties. It has a cargo capacity of 70t max, which is extremely poor for its price and size, making it an unsuitable ship for pirating, trading, and mining. The Fer-de-Lance is essentially a bigger Vulture; unbeaten in combat potential for its size but is terrible in every other role. The ship therefore is perfect for Bounty Hunters and can rack up profits in Resource Extraction Sites very quickly.

The Fer-De-Lance has a relatively low heat signature, and is well-suited for both shielded (using a shield cell does not result in a major overheating, and the strong base shielding can be improved further with shield boosters) and shieldless stealth builds (small heat output, durable hull and the ability to mount several heat sinks without sacrificing other utility modules allowing for prolonged silent running).

The pilot's seat of the Fer-de-Lance is to the right of the centre of the ship, having the co-pilot's to the left and slightly further back. The canopy glass offers a phenomenal field of view, having more than 90 degrees vertically, and more than 180 degrees horizontally.

The Fer-De-Lance has different heat radiator animations for general heat dissipation and Frame Shift Drive charge up for hyperspace. While both feature the animation of the same yellow/orange lighted radiators, the Frame Shift Drive charging animation also features blue lighted radiators and two blue beams. The blue beams are projected from slightly behind the cockpit and are visible from the cockpit from the side windows on both sides.

All ships are highly customisable through the Outfitting menu of Station Services. Listed below is the default load-out for the Fer-de-Lance. 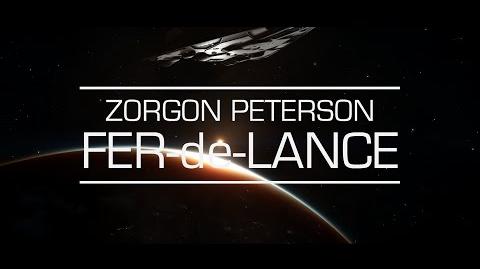 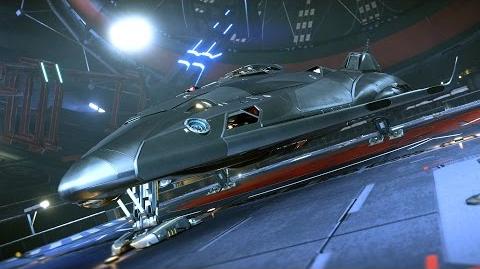 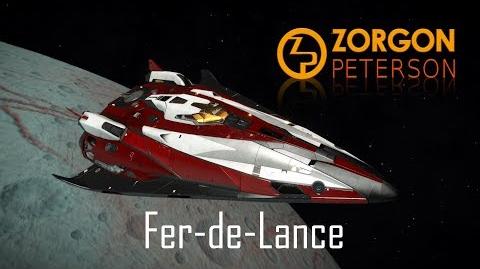