The flight model of Elite Dangerous has Newtonian physics with a fly-by-wire layer applied over the top to make the combat feel visceral and seat-of-the-pants, rather than Frontier's jousting at huge distances.[1]

The fly-by-wire system of Flight Assist is a ship computer which keeps the ship within flight parameters, constrains the angular and linear velocity and makes it easier to pilot. It can be turned off so you have to manually adjust the thruster forcers, but Flight Assist and fly-by-wire is always partially on to keep the ship movement in specified limits overlayed on a Newtonian mechanics model. So there is Newtonian physics, but the fly-by-wire system overrides the feeling of skidding.[2]

Sanpaku explained the flight model like this: if future technology provides the high thrust and high ISP engines to make the high G acceleration and low fuel consumption of ED ships possible, every engine would be weapon-like plasma accelerator.[3]

ED ship behavior can be achieved using Newtonian dynamics if:

Its a pretty complex set of arbitrary restrictions overlayed on a Newtonian mechanics model, designed to work together to create the atmospheric flight of cinematic sci-fi. The last restriction, while perhaps modelling engine spool-up/latency, mainly aids docking.

The jousting combat of Frontier: Elite II and Frontier: First Encounters probably compelled them to choose the atmospheric dog-fighting model, with its arbitrarily limited rotational velocities, over realism for ED. Aleksej said it has both realistic and unrealistic elements and this combination is exactly right for the enjoyable gameplay.[3]

In an interview David Braben said this about the flight model: "Most of the ‘brutal realism’ of Frontier will continue. The real galaxy and so on. For the combat model we are doing more fly-by-wire than in Frontier, but this is to improve the feel of the game; the realism is still there. Don’t forget there was fly-by-wire in Frontier too."[4]

Braben clarified that Elite: Dangerous is in some ways a mixture of Elite and its sequel, Frontier. "It depends what aspect of the game you look at. I think in many respects it's more comparable to Frontier in terms of the way the galaxy works, that sort of thing. But in terms of the way you fly it's much closer to Elite. We're going to have Newtonian physics. But the way that we apply the fly-by-wire layer over the top of makes the combat feel really visceral and seat-of-the-pants, rather than [as in Frontier] jousting at huge distances."[1]

The kickstarter FAQ stated on November 14 2012: Will you have Newtonian physics in the game?"[2]

"Yes. The degree of the fly-by-wire to override the feeling of skidding is something we will carefully tune."[2] 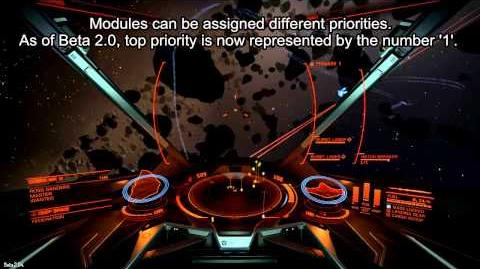 Retrieved from "https://elite-dangerous.fandom.com/wiki/Flight_Model?oldid=125453"
Community content is available under CC-BY-SA unless otherwise noted.