The Interdictor is a triggered device that can pull a target ship out of supercruise along with your own vessel, in effect dragging both ships to the same area in space. Using it requires the target to be in front of your vessel, facing a similar direction, and within range of the device. If these three criteria are met, activating the FSD interdictor will result in a stream of directed energy towards the targeted ship. This stream attempts to destabilize its frame shift drive. To ensure a successful drop, keep the target vessel in the centre of the reticule at all times. The target ship may attempt to escape an interdiction; its HUD will highlight an escape vector for its pilot to aim at. The relative effectiveness of the target and interdicting pilot will result in either a successful interdiction or a failure. In both cases the interdicting vessel will drop from supercruise. Interdiction places significant stress on all vessels involved, causing a small amount of damage. Pilots may submit to an interdiction by throttling down to avoid suffering this damage. Be aware, interdicting a vessel not currently wanted by the authorities is a crime.

The Frame Shift Drive Interdictor is a module used to interdict other ships while in Supercruise. It is a mainstay among pirates, bounty hunters, security forces, and militaries. The Achilles Aerospace division of Achilles Corporation manufactures all FSD Interdictors sold throughout the galaxy.

A Frame Shift Drive Interdictor can only be deployed in supercruise. When in range and behind the target, activate the Interdictor to begin an interdiction. Attempting to interdict any non-wanted craft will result in a fine, but no bounty is incurred unless the user opens fire on their target.

The length of an interdiction tether is measured in seconds. A tether's maximum length varies between 3 and 16 seconds depending on the class and rating of the Interdictor, and also scales with the speed of the pilot's craft. For example, having an Interdictor with a 10-second range and having a speed of 10c will result in a 100 light-second effective interdiction range. Note that all Interdictors have an effective angle of 50 degrees by default.

When an interdiction is successfully initiated, a red marker will appear representing the target ship. The user must keep the mark in the crosshair of the ship to increase their interdiction level, which is shown on each side of the crosshair: the left side is the target's evasion level, while the right side is the user's interdiction level. The goal for either party is to maximize their bar in order to escape or succeed in the interdiction. NPCs will put up very little struggle and can be interdicted in very sluggish ships with ease, but they will also never surrender to interdictions. While players will be more mobile and often trickier, the advantage is generally on the side of the interdicting ship. If the target successfully dodges or too much time passed, the user will be forced out of supercruise while the target can continue on. If an obstacle such as a planet gets in the way of an interdiction, it will end immediately and the user will not be forced out of supercruise unless they stray into the planet's exclusion zone. The target can also cancel interdiction if they have already begun charging their Frame Shift Drive for a hyperspace jump to another system before they are interdicted and then complete the jump; charging for jump cannot be initiated during an interdiction. 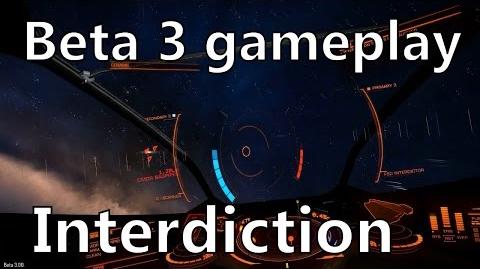 Elite Dangerous Beta 3 Gameplay - How to interdict other players
Русский
Community content is available under CC-BY-SA unless otherwise noted.
Advertisement