Frontier: First Encounters is a space trading and combat simulator video game for the IBM PC, released on April 16, 1995. It's the sequel to Frontier: Elite II, the prequel of Elite Dangerous and the third game in the Elite series. The game was created by David Braben's company, Frontier Developments, and distributed by GameTek. It's often referred to by the shortened title of 'FFE'.

The planned Amiga version of First Encounters was never completed; it had been originally slated for a summer 1995 release for the Amiga 1200, Amiga 4000, and CD32 systems.

David Braben said in an interview with PC Gamer in 1995: "The idea with First Encounters was to take the bits that worked out of Frontier and make them better. In a sense, the game is a platform for adventures. The way the game's put together, there are similarities. But if you look at the difference between Elite and Frontier, and then compare Frontier with First Encounters..."[1]

"It's taking, fundamentally, the same idea - you are in space and given a space ship - but at each stage more and different things have been added. In the same way that Frontier had the majority of Elite in it for continuity. First Encounters has a lot of Frontier, but the points, anything that didn't work so well in Frontier has been improved. Now we have a major storyline. There's the fact that there's now a lot more for the dedicated player."[1]

Frontier: First Encounters was first released in the UK and other countries in April 1995. It shipped with in a quite minimalist box design. However, in the USA the publisher Gametek released the game with a much more interesting design. It had detailed full color graphics which improved the product's in-store appeal. For the USA release, the game was only called "First Encounters"; the "Frontier" element was removed for unknown reasons.[2]

According to Guinness World Records: "Frontier: First Encounters was the first game to contain procedurally generated terrain and textures."[3]

A collection of short stories was included; Further Stories Of Life On The Frontier. 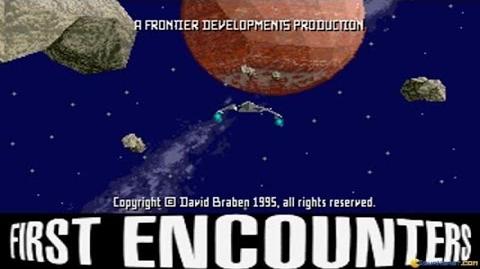 A Viper in Frontier: First Encounters