The Galactic Plane is the plane where most of the mass of the galaxy, consisting of stars and other astronomical objects, is located. It is approximately 100,000 light-years in diameter and 1,000 light-years thick.

High Points in the Galaxy

The system Systeia Aub BA-A g12 is +3173.375 light years above the galactic plane. It can be reached using the route listed below, provided the ship being used to make the trip has a jump range of at least 55ly, makes use of neutron star boosting, and watches its fuel consumption.[1]

The system HIP 58832 is +5319.219 light years above the galactic plane, and lies directly above the Core Systems. It features the outpost Rackham's Peak, and is only reachable with the use of a Fleet Carrier.

Low Points in the Galaxy

The system Syrumbi YE-A g4 is 3216.875 light years below the galactic plane. It can be reached using this route:

HIP 13044 is 17,000 light years below the galactic plane, outside the galaxy. It is lower than the PSR systems and normally inaccessible. CMDR Halosos was teleported there by Frontier staff for his birthday present during Elite Dangerous Beta 2.1.[2]

Furthest Points in the Galaxy

Beagle Point is located 65,279 light years away from Sol. This is more than twice the distance from Sol to Sagittarius A*. There are no further systems to jump to from this system in a 33ly Asp Explorer. The Milky Way as seen from Beagle Point there is a shiny band in the distance, too far off to see the dust clouds.

Oevasy SG-Y d0, nicknamed Ishum's Reach, is one of the furthest systems from the galactic plane. It is 65,647.34 light years from Sol. The most remote planet in the system is Oevasy SG-Y d0 9 F, also known as Salomé's Reach. 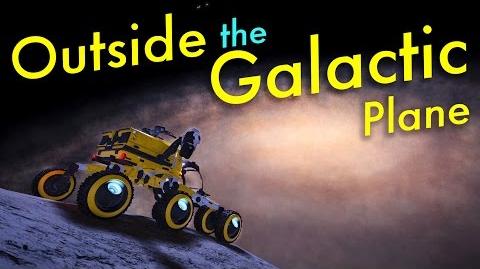 16,000LY Outside the Galaxy Elite Dangerous

Galactic Plane of the Milky Way in Elite Dangerous

2300 ly below the galactic plane near Colonia