The Empire's standard small class single man fighter is as famous for its agility as it is for its short range. If you see one of these then you know that something bigger is lurking nearby.

The Gu-97, also known as the Imperial Fighter, is a Ship-Launched Fighter manufactured by Gutamaya for the Empire. It is noted for its high maneuverability and firepower, but this impressive dogfighting capability comes at the cost of shield and armour strength. It is typically launched as a support craft for Majestic Class Interdictors, and is useless on its own if outflanked or outnumbered. It is most commonly seen in conflict zones which include an Imperial faction, or patrolling space stations within Imperial territory. The Gu-97 can be purchased in Imperial systems only, but can be restocked in any system. It is also one of the four vessels permitted in the CQC Championship.

Compared to the F63 Condor and Taipan Ship-Launched Fighters, the Gu-97 sacrifices protection for a dramatic increase in mobility. This results in a spacecraft that novice pilots may have difficulties adequately controlling, but which also rewards experienced pilots who know how to track targets and evade enemy fire.

As an SLF, the Gu-97 does not possess a Frame Shift Drive, and thus cannot jump to Supercruise or Hyperspace. Its operational area is limited to the vicinity of its deployment point, such as a station, outpost, carrier, or ship-mounted Fighter Hangar.

Due to the Gu-97's short length, light weight and high speed, it is prone to spinning out of control when it collides with another object at an angle. When this happens the pilot may lose control of the fighter for an extended period.

The Gu-97 can be purchased in Empire systems only, but can be restocked in any system. 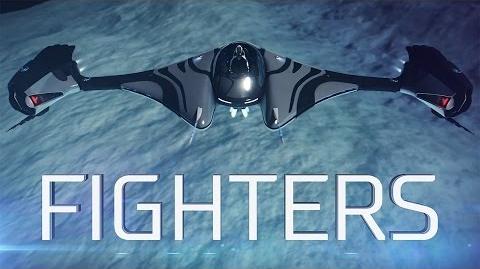 Blueprint for the Gu-97

Concept art for the Gu-97

The old appearance of the Gu-97, before the CQC update

Gu-97 in a planetary ring