The Guardian Sentinel is a drone-like construct found at certain Guardian Structures. They are fully-functioning examples of Guardian defense technology, and operate in much the same role as conventional Skimmers - albeit armed with advanced Guardian technology.

Guardian Sentinels have been confirmed at Guardian Structures found in the Col 173 Sector QU-O d6-25, HD 63154, and Synuefe EU-Q c21-10 systems, which were identified as possible Guardian sites by Ram Tah following an extensive molecular analysis of artefacts recovered from other Guardian ruins.[1] The ruins found in these systems exhibited a previously-undocumented configuration, and were patrolled by Guardian Sentinels which attacked intruders on sight.

Sentinels are roughly comparable to the S9 Goliath in terms of durability (albeit they lack any form of shielding) and mobility, and are armed with two weapons:[2]

Both weapons strike with enough force that repeated impacts from the Sentinel's main cannons can flip or even launch an SRV a decent distance, given that the ruin sites are located at low-gravity worlds. It is advised that only one Sentinel be engaged at a time, to minimize the risk of being flipped over and/or launched around.

Their attacks can activate - and impart significant charge to - the Energy Pylons required to access the Ancient Data Terminals at these sites. Savvy commanders may be able to trick the Sentinels into partially or even completely charging pylons for them, though this will likely take longer than simply destroying the Sentinels and activating the Pylons manually.

These Sentinels date from some time prior to the second Guardian civil war. They are designed to respond aggressively to any unauthorised activity around the ruins. If you are forced to defend yourself, kinetic weaponry would be your best form of attack, since the Sentinels have no shields. Sentinel weapon parts and wreckage are of considerable value, so the loss is not signiﬁcant.[3] 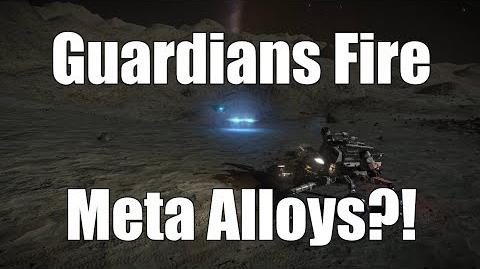 Ram Tah and a Guardian Sentinel

Retrieved from "https://elite-dangerous.fandom.com/wiki/Guardian_Sentinel?oldid=135691"
Community content is available under CC-BY-SA unless otherwise noted.