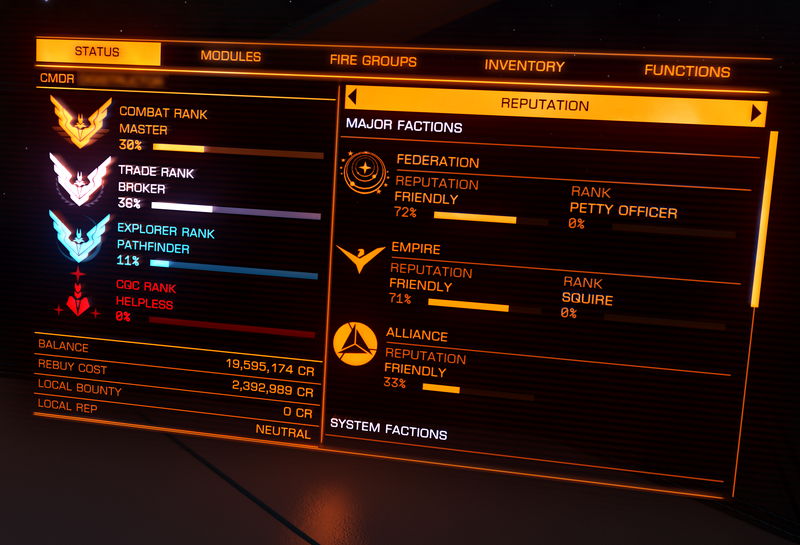 The status panel displays a variety of information. The left half displays (from top to bottom) your name (prefixed by "CMDR"), your Combat Rank, Trade Rank, Explorer Rank, CQC Rank, Balance, ship and module rebuy cost (in case of ship destruction), local bounty, and local reputation.

The right half can be cycled between various menus to display lots of useful information such as reputation with all of the main factions as well as the minor factions active in the current system, personal statistics, acquired permits, etc.

This panel displays all of the ship's currently equipped modules. The module name, class, rating, type, power consumption (translates into heat generated), priority, and health are all displayed here. Module priority can be changed here by highlighting the module (default S and W) and moving left or right (default A and D) to change the priority at which they receive power. Total power usage and heat generated are shown at the bottom of the panel.

Modules can also be turned on and off by highlighting the module and "selecting" it (default Space) which will stop them from consuming power and generating heat. Two exceptions are the ship's power plant, and cockpit canopy.

The first single-player combat mission starts with a configuration of only one fire group with both weapons assigned as primary, meaning they both fire when the trigger is pressed. In this example, another fire group could be set-up, with only one gun assigned to each of the two fire groups. It will help to try around with this to get a good understanding of the mechanic.

This displays your ship's cargo and is also where miners access the Refinery module interface. The cargo capacity can be seen at the bottom of the panel. Cargo can also be jettisoned from this panel by selecting it and choosing "Jettison".

Displays a variety of options and toggles for the player to customize their flight experience. Ship type and jump range are also displayed here on the left.

Retrieved from "https://elite-dangerous.fandom.com/wiki/HUD/Right?oldid=88586"
Community content is available under CC-BY-SA unless otherwise noted.