Start a Wiki
watch 01:46
Elite Dangerous Lore: Imperial Clipper
Do you like this video?

The very definition of a multipurpose ship, the Imperial Clipper is a versatile vessel well suited to a variety of roles. A generous quantity of internal compartments has made it very popular with miners, while a sizeable cargo hold and robust defences have endeared the vessel to traders. Impressive straight-line speed rounds out the ship's profile, and makes it one of the most distinguished members of the Gutamaya family.

This ship is quite popular with pirates, traders, and some combat pilots. It is a reasonable pirate ship due to the large cargo capacity and heavy armament. Traders may find this ship appealing due to its superb cargo capacity and defensive capability; while it is more expensive than the Lakon Type-7 it can easily defend itself against a pirate.

Pilots of any profession may appreciate its speed; with fully upgraded Thrusters, it is comparable to that of smaller ships such as the Cobra MkIII and the Imperial Eagle. Additionally, its pitch rotation and yaw speed are higher than most ships, making it feel like a very hefty, weighted-down Eagle with a boost speed that is similar to that of the Cobra MkIII. Its only manoeuvring drawback, and likely the reason for its low overall agility rating, is its poor lateral thruster capability; the vertical-lateral thrusters are very weak compared to those of other ships. This weakness, combined with very weak shields for its size and wing-mounted hardpoints ill-suited for fixed weapons, limits the Imperial Clipper's efficiency as a PvP combat ship even if the shields are upgraded to maximum. The Imperial Clipper is also currently the fifth widest ship controllable by players, which may pose a challenge with docking. Compared to the Alliance Chieftain, which has a similar price tag, it has better shields, but less damage output and worse armour. However, the Clipper is better at multi-purpose roles.

Speed and manoeuvrability fall off more heavily when loaded than other ships, bringing it back to more common speeds and turn rates when hauling cargo. However the ship is capable of carrying 248T of cargo. While this is quite a lot less than what the Type-7 can carry, the Clipper is very capable of defending against pirates and its high manoeuvrability lets it dodge interdictions easily, making the Clipper viable for armed traders. The ship's high speed also lets it escape with ease.

The ship is a good Miner with high cargo and lots of internals. The downside is the ship has only two medium hardpoints and two large. This means either sacrificing a huge amount of damage output by equipping Class 2 Mining Lasers or Seismic Charge Launchers in Class 3 hardpoints, or settling for sub-par mining speed. The ship's large body can also prove problematic in clustered asteroid fields and Planetary Rings.

With around 28Ly of jump range, the Clipper is an average vessel for exploration; its more than capable of doing the job and is a good choice for jobs that require going long distance but is not the best for a dedicated explorer.

Both the ships interior and exterior are luxurious in design, the engines sport a radically different sound than other ships, and the large cockpit canopy features an unobstructed view of space. The Imperial Cutter has a similar appearance to that of the Clipper, albeit much larger.

The weapon hardpoints are located as follows: One Class 3 large hardpoint on the top of each wing-tip nacelle (total of two class 3 mounts), and One Class 2 medium hardpoint on the underside of each wing where the wing attaches to the main fuselage (total of two class 2 mounts). The wing-tip mounts are very far from centerline and will have trouble converging their fields of fire unless used with gimballed or turret mounted weapons. The underside mounts although closer together, also suffer the same field of fire convergence issues although to a lesser degree than the wing-tip mounts. Due to this, fixed weapons generally are not easy to use with this ship. However, if two fixed weapons are placed on the same side of the ship, it is possible to use fixed mount weapons.

All ships are highly customisable through the Outfitting menu of Station Services. Listed below is the default load-out for the Imperial Clipper. 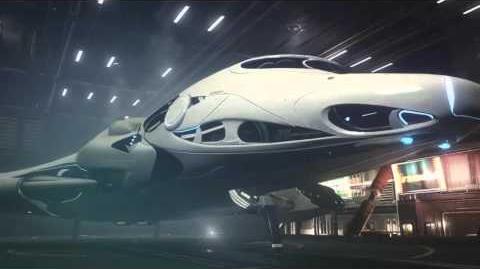 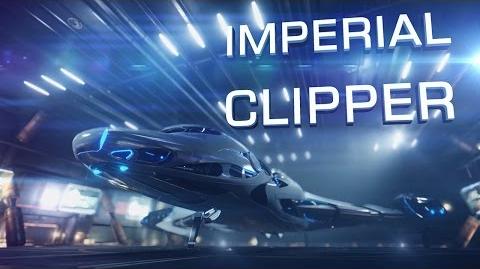 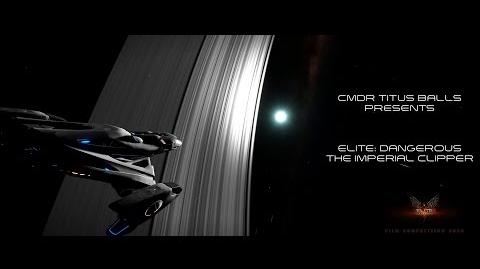 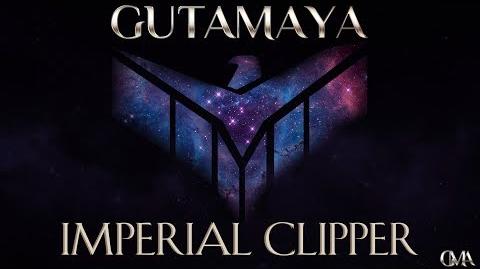 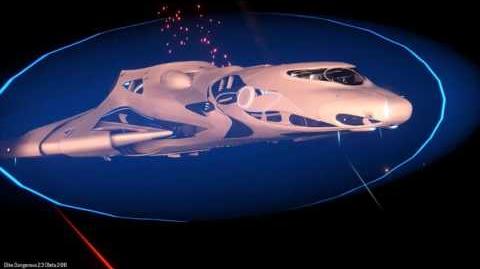 Clipper VS things
Add a photo to this gallery

Imperial Clipper landed on a planet

Docked Side View of Clipper with Tactical Graphite Paintjob

Imperial Clipper cockpit with UI disabled
Add a photo to this gallery
Retrieved from "https://elite-dangerous.fandom.com/wiki/Imperial_Clipper?oldid=126270"
Community content is available under CC-BY-SA unless otherwise noted.