An Incursion is a Background Simulation state that occurs when a star system is first "Infested" and then attacked by Thargoids. Incursions can be prevented or repulsed by destroying Thargoid Interceptors and Thargoid Scouts in a targeted system.[1]

An imminent Thargoid Incursion is signalled by the arrival of Thargoid Interceptors and Thargoid Scouts in a system and the presence of Non-Human Signal Sources. At this time, the system is classified as experiencing the "Infested" state, and a full Incursion can be prevented by destroying a large quantity of those vessels to defend the system; the number of kills required varies from system to system. If an insufficient number of Thargoid ships are destroyed in a certain period, the system will eventually enter the Thargoid Incursion state. Eagle Eye identifies a new wave of Infested systems each week.

Unlike full Incursions, GalNet does not track Infested systems, and there is no way to keep track of progress made towards clearing Infested status from a system.

Once active, Thargoid Incursions become a system-wide negative background state, and are signified by a system's allegiance changing from Federation, Empire, Alliance, or Independent to "Thargoids". As when attempting to prevent the Incursion, an active Incursion can be ended by destroying a quantity of Thargoid ships. Incursions can persist indefinitely until they are defeated.

As an Incursion persists, it has various cumulative negative effects on the system:

In addition, ships jumping to a system that is experiencing an Incursion may be hyperdicted. 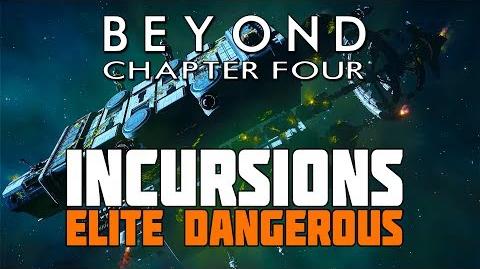 Retrieved from "https://elite-dangerous.fandom.com/wiki/Incursion?oldid=131455"
Community content is available under CC-BY-SA unless otherwise noted.