Interdiction is the process of using a Frame Shift Drive Interdictor to intercept another ship during supercruise travel. Interdictions can be caused by System Authority Vessels, Bounty Hunters, Pirates, and other players. An interdiction instigated by a Thargoid vessel while in hyperspace is known as a hyperdiction.

If an interdicting ship is successfully evaded by its intended victim, it will forcibly drop from supercruise and have to endure a FSD cooldown, which may give their target enough time to reach safety at a local station or jump to another system. The victim will remain in supercruise.

System Authority Vessels will interdict only to scan for criminal status (Bounties) and contraband (Illegal Goods/Stolen Goods). If either scan turns out positive then they will begin to open fire on the ship.

When Bounty Hunters interdict a ship they will likewise scan it to determine its criminal status, and they will open fire if the scan reveals a bounty.

Pirates seek to steal a ship's cargo and will exhibit one of four different behaviors after interdiction. They may open fire immediately to frighten the victim into jettisoning cargo. They may broadcast a threatening message and wait a few moments for cargo to be jettisoned, and open fire if the victim does not drop any cargo or attempts to flee. They may scan the victim's cargo before demanding it be jettisoned. Lastly, if the pirate finds their victim has no cargo or is only carrying Limpets, they will express disappointment and let the victim depart peacefully. 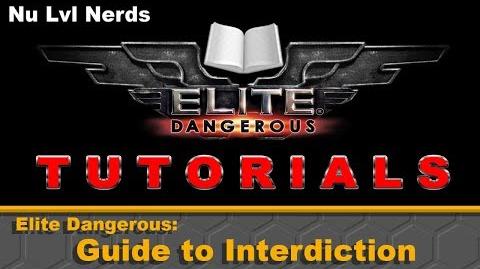 A pirate scanning for cargo in LHS 3262
Русский
Community content is available under CC-BY-SA unless otherwise noted.
Advertisement