Professor Palin spent the early part of his career in the Federation, but in 3301 he decided to establish an independent institute dedicated to studying the Thargoids. The following year, he set up a research base in the Maia system focused on the development of new defence technologies. He continues to research the Thargoids in Arque, and is considered one of the galaxy's foremost experts on Thargoid technology.

Professor Ishmael Palin is one of the galaxy's foremost experts on Thargoids and their technologies, and the founder and former director of the Palin Institute.[1][2] Originally a Federal citizen and member of the Homeland Scientific Council, Palin went independent and established the Palin Institute in the Nganji system in late 3301 after a Federal Thargoid Sensor research programme he was leading at Fort Harrison, Arcturus was abruptly terminated. Following a life-threatening encounter in 3302 with an unidentified organisation that wanted to suppress his research, Palin retired in order to continue his work in relative privacy. He currently offers Engineering services to independent pilots, and is skilled in the improvement of Thrusters and Frame Shift Drives.[3]

On July 18, 3305, a Thargoid offensive in Maia forced Palin and his staff to evacuate from his original workshop, Palin Research Centre on Maia A 3 A. His current workshop is Abel Laboratory on Arque 4 E.

Late in 3301 Professor Ishmael Palin began an independent research programme, based at Christian Dock in the Nganji System, to study anomalous extraterrestrial objects discovered earlier in the year.[4]

In December he issued a request for help in establishing a new research base on Maia b1ba in order to safely study the artefacts. The request was positively received by the galactic community and Palin's team was soon ready to start work on their new base of operations.[4]

On 22 Jan 3302, Professor Ishmael Palin called upon independent pilots to deliver meta-alloys – produced by the newly discovered 'barnacles' in the Pleiades Nebula – to Obsidian Orbital, suggesting that the material could be the cure for the technological virus spreading through inhabited space. But Professor Violet Belbin of the Xenological Research Institute has expressed doubts.[5]

By January 3302 he had announced a dramatic breakthrough in his research into meta-alloys. He confirmed that technical issues at the Obsidian Orbital were a direct result of interference from the artefacts. They also had the ability to repair themselves using resources from other ships and machinery.[4]

Professor Palin founded the Palin Institute in 3301. On 15 April 3302, Palin retired from the Palin Institute. He relinquished his directorship to his closet ally Cora Shaw. He would continue researching the Unknown Artefacts and meta-alloys, albeit in a more inconspicuous fashion, at his personal research centre on Maia A 3 a. Palin said: "It has been a tremendous pleasure to be part of the discourse surrounding the Unknown Artefacts, and to share ideas and opinions with so many passionate individuals. But there are dark forces at work in the galactic community – forces that exist in opposition to the ideals I hold most dear – and I lack the strength to continue fighting them." "I have therefore decided to relinquish my directorship of The Palin Institute to Professor Cora Shaw, who has for many years been my closest ally. I have every faith in Professor Shaw's ability to lead The Palin Institute to even greater heights, and to uphold the ideals for which it stands."[3]

In October 3302, the Federation quietly established a blockade of Palin's headquarters, part of the wider cold war between Federal and Imperial forces over the monopolization of meta-alloys. Palin was essentially kept under house arrest and was unable to leave. The blockade was withdrawn on September 9, 3303, as both the Federation and Empire began backing down over the meta-alloy issue since both had failed to gain any control over their sources. Professor Palin was pleased by the development.[6]

Thargoid attack and evacuation to Arque

On July 11, 3305, Aegis reported that Thargoid forces had, in a matter of hours, completely withdrawn from the Core Systems and the Pleiades Nebula with the exception of the Maia and Merope systems. Admiral Aden Tanner explained that Aegis's two main theories for the Thargoids' departure were that their numbers had been depleted or they were reconsidering their strategy. Whatever the cause, Eagle Eye confirmed the development and reported "No Activity Detected" for that cycle. Professor Ishmael Palin urged caution, however, warning that the war with the Thargoids was likely far from over and there was no evidence that human activity had prompted this retreat.[7]

On July 18, the Thargoids returned to the Pleiades Nebula in large numbers, attacking three stations without being detected by Eagle Eye and massing in Maia for an attack on Palin Research Centre. Professor Palin and his staff managed to evacuate to the megaship Carson's Spring before the surface port came under fire, but the vessel was attacked and disabled before it could depart Maia. Professor Tesreau asserted that the Thargoids were likely attempting to reassert themselves in their original territorial claim, and requested help from independent pilots in defending Carson's Spring, as local security forces were overwhelmed.[8] The following message was broadcast throughout the system by a listening post:

Palin Research Centre has been evacuated.

Port services have been suspended. All personnel must leave the station immediately via the nearest emergency transport.

Thargoid craft have occupied the airspace around this facility. Independent pilots are urged to depart at once, using all available defensive measures.

Defense efforts were successful, and Admiral Aden Tanner of Aegis reported that Carson's Spring was able to resume its journey to the Arque system on July 22. Professor Palin began rebuilding his operation at Abel Laboratory on Arque 4 E.[10] On July 30, he resumed his research and services, and notified his clients of the move.[11]

Meanwhile, one of Professor Palin's former apprentices, Chloe Sedesi, announced plans on August 6 to establish an Engineering workshop of her own in the Witch Head Nebula enclave.[12] On August 8, Sedesi's workshop at Cinder Dock in Shenve opened for business, offering a set of services similar to Palin's.[13] 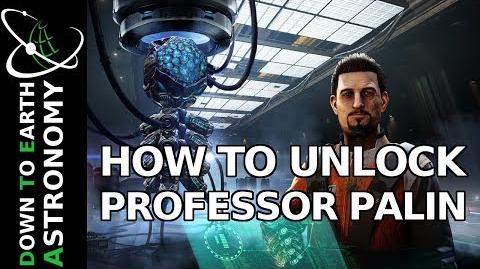 How to unlock Professor Palin

Palin Research Centre on Maia (Beyond)

Professor Palin and a Thargoid Sensor

Another view of Carson's Spring 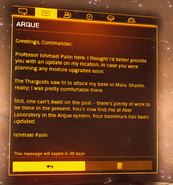 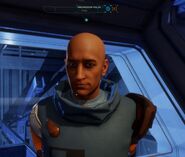