Livery refers to ship cosmetics and can be changed via the Outfitting menu of Station Services. Currently ships can be equipped with decals, paintjobs, dashboard ornaments, external kits, weapon colours, name plates, and thrust colours. Paintjobs are also available for ship-launched fighters and SRV. These items do not alter ship performance in any way, although certain bobbleheads and Ship Kit pieces may partially obscure a pilot's view.

Currently, generic NPCs will not use Livery options at all. Police forces and some specific ships such as Rescue Ships will use their own set paint and decals, but many of these are NPC-only, and they will never use Ship Kits.

There are no in-game options for users to create their own custom paintjobs, decals, etc, nor are there any third-party tools for this. Except certain decals, all items must be purchased at the Official Store; the Outfitting menu provides direct links to the store. Prices vary, and reduced sale prices are occasionally offered and announced in the newsletter. Combo packs are available for most items.

New items are typically added to the Frontier Store every Friday.

Decals are icons and logos that can be placed on 3 pre-determined spots on a ship (front, left, and right). A different decal can be placed in each spot. The decal colours automatically vary to suit the ship's paintjob.

Only the Pilots Federation rank decals and the Powerplay decals are freely available to all players. The remainder either must be purchased at the Official Store or are limited-access as described below.

The Pilots Federation decals[1] are earned through gameplay. There are three types: Combat, Trade, and Exploration. As a CMDR achieves a higher rank in one of the three fields, they will earn the corresponding decal. There are a total of 8 decals per field (there are no decals for the beginner rank in each).

A Triple Elite decal, unlocked by reaching Elite in all three categories, will be added in Chapter Four (3.3) of Elite Dangerous: Beyond.[2]

Beginning on March 29, 2018, exclusive decals were implemented as a reward for participation in select Community Goals. Community Goals featuring decals as a reward are planned to take place once per month. Some CGs will be competitive in nature and only give the decal to players who back the winning side, while cooperative CGs will offer the decal to everyone who contributes above a certain threshold. Higher reward tiers offer additional colors of the decal. Typically, the Top 75% rewards the standard version of the decal, Top 50% rewards a bronze decal, Top 25% rewards a silver decal, and Top 10% rewards a gold decal.[3] Two "Emissive" variants of the Combat Zone Decal were offered as rewards for the Top 1% players in combat CGs held the week of July 19, 2018.[4][5]

The following decals are available for purchase at the Official Store.

The Onionhead paintjob for the Cobra Mk III is bundled with 3 decals that may be used on any ship type: "Oh" and 2 smiley faces. This bundle is currently priced at £3 ($4.00).

A Halloween-themed pack containing six luminescent decals and available for £1 ($1.75).

The Powerplay Decal Pack is available for free on the Frontier Store.[6] It contains 11 decals representing each of the 11 Powers.

The following decals were offered as backer rewards during the Kickstarter campaign[7].

Provided to all players who ordered a Kickstarter tier of £5 or above (allows access to Founders World).[8][9]

Provided to "day one" Kickstarter backers. It was also made available later on the Official Store to all players that purchased the Mercenary Edition of Elite: Dangerous (this skull is not to be confused with the large skulls that are part of the Pirate Faction paintjobs).[8]

Founding Members of the Elite

Golden Elite Pilots symbol with the word FOUNDER across the centre. Available only to Kickstarter pledgees who pledged 150 GBP or above.

For Kickstarter backers who pledged a tier of at least £30, any of these additional 10 upgrade decals were available for £5 each. They include a skull with mohawk, a bird of prey, a tiger, a scorpion, a fist, a bat, a skull with chemical mask, a moon, a shark, and a snake (cobra).

These decals were obtained by redemption of special promotional codes distributed during certain major events.

A 4-pointed star given to players who filled out this on-line form during or following the 2016 PAX South gaming festival.

A large bold "X" given to players who redeemed a promotional code from the 2015 EGX gaming trade show.

A flaming bird given to players who redeemed a promotional code from Lavecon 2015 or 2016.

A bullseye icon given to players who who redeemed a promotional code from Gameson 2015.

The Elite Community decal features a handshake in a triangle with wings, and was given to players who attended Elite:Meet 2015.

An exclusive decal was given to all PC players who purchased access to the 2.3.10 beta and completed the available Community Goal in June 2017.[10]

Decals have been granted by Frontier Developments to other groups of players:

A paintjob can only be applied to the specific ship, SRV, or ship-launched fighter for which it was created and thus cannot be equipped on any other type. If the painted ship is destroyed the player can re-apply it to the replacement ship any time they are docked at a station with an "Outfitting" facility.

Paint degrades by wear over time, which can be seen in the external camera view. If a new paintjob is applied to the ship, the wear remains. Paint wear can only be removed by specifically repairing the paint in the ship maintenance facility at a station (Station Services > Advanced Maintenance > Repair > Paintwork). Note the "repair all" option does not repair paint wear.

Prices currently range $1.75 to $4 for single paintjobs, and $3 to $12 for packs of multiple paintjobs. Generally higher-priced paintjobs and packs are more stylized, and some paint packs are bundled with other store items.

Some paintjobs are made available only during limited-time offers, such as holiday sales or special events.

Black Friday paintjobs (also called "Midnight Black") were given as a free bonus to all users who pre-ordered the Horizons season pass, had Horizons beta access, or owned the lifetime expansion pass before December 1, 2015. This amounted to 29 total paintjobs, one for each ship available at the time.[11]

A redesign of the Chrome series. Players who owned any Chrome paintjobs were given the respective Chromed variants as a free bonus.

Festive Paint Packs are made available every December for the Asp Explorer, Cobra MkIII, and Sidewinder MkI. Each pack contains six paintjobs.

A redesign of the Gold series. Players who owned any Gold paintjobs were given the respective Golden variants as a free bonus.

The Horizons Pack was included for free with all pre-orders of Elite Dangerous: Horizons. It included the exclusive Desert, Lunar, and Polar paintjobs for the Cobra MkIII.

Iridescent paintjobs are multicoloured metallic gradient paint jobs available in four varieties (Aurora, Dusk, Scorch, and Twilight). They were available from August 31, 2018 to September 7, 2018 for the following ships:

The Mercenary Edition Pack was a paintjob pack given only to purchasers of the Elite Dangerous Premium Beta. It included exclusive paintjobs for the Cobra MkIII, Sidewinder MkI, and Viper MkIII.

Dash ornaments are small objects placed on the cockpit dashboard and wobble as the ship moves. Current offerings include "bobblehead" figures, miniature ships/stations, number/letter characters, and planets from the Sol system. Up to 10 can be placed on the dashboard at once, but no duplicates. Prices currently range from $4 to $8.

Ship kits are cosmetic modifications that alter the exterior appearance of a ship, such as fins, winglets, fenders, etc. Each kit has multiple pieces (currently 12 to 16) that can be added in multiple combinations to create a variety of individual looks, though only one piece can be selected per "slot". Prices currently range from $10 to $12. There are two types of ship kits: standard and raider-themed. Raider kits include six 'Corroded' Paint Jobs.

Ship Kits are currently available for the following ships:

Weapon colour sets change a ship's weapons fire from the default colours. Each set is a single colour and changes all weapons on the ship to that colour. Combining multiple colours on a ship is not possible. Prices are currently $1.75 or £1 per colour set.

Custom weapon colour sets will partially override custom effects applied by Engineering (such as the colour change applied by Scramble Spectrum) and alter any passive lighting effects (such as the glow from Guardian Gauss Cannons).

As of The Commanders v2.3 update, users can specify names and ID numbers for their ships.[14] To make these appear on the ship's hull, stylized plates must be purchased from the Official Store. Plate packs include 9 plates (3 designs each in white, grey, and black) and are currently $3. Plates can be used on any ship the player owns.

The exact position of plates varies from ship to ship, but each ship has a pair of plates that can only be used for the ID, and a second pair of plates that can be used for the ID or the full name. In most cases, the former pair will be near the rear part of the hull and the latter pair near the front, though exceptions (such as the Krait MkII, where the ID-only plates are near the front and the full-name plates are further back) do exist.

Introduced the same week as the v2.3.10 update,[15] colours can be purchased for the engine thrusters and their contrails. Each colour can be used on any ship the player owns (including ship-launched fighters, but not the SRV). Prices are currently $1.75 or £1 per colour.

String Lights are a string of decorative lights in various color combinations that are used to adorn a ship's cockpit canopy. Some sets feature ornaments. A slot for String Lights was first added to the Livery menu in August 2017, but it was not until December 2017 that the first set was sold on the Frontier Store. They cost $6.00 or £4.00 each. Released sets include:

Introduced in Beyond Chapter One (3.0), users can now choose between multiple COVAS ship/SRV voice options. Two COVAS voices, Verity and Victor, are included as default/free options. Additional voices can be purchased from the Frontier Store for $7 USD each. 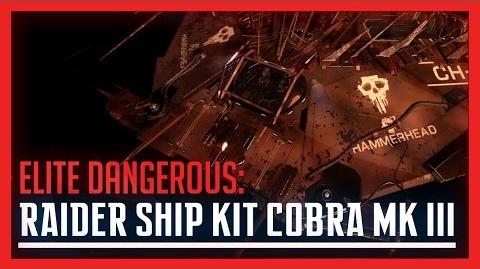 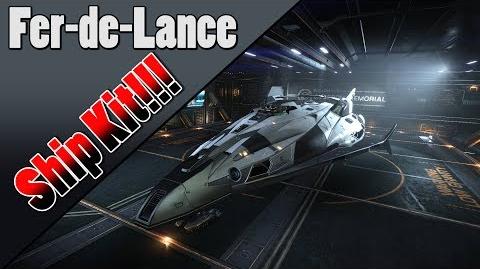 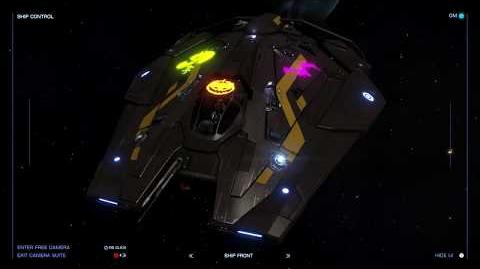 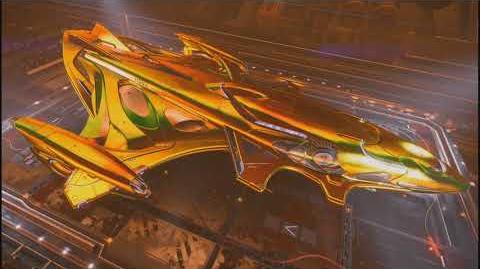 Iridescent Paintjobs
Add a photo to this gallery

Planets of Sol bobblehead livery
Add a photo to this gallery