Megaships are a class of extremely large ships primarily used for commercial purposes, such as transporting bulk quantities of goods or large groups of people. A subset of megaships possess Landing Pads and docking facilities for receiving smaller vessels. Unlike Capital Ships, Megaships are generally not designed for frontline military duties, but they can still be used in support and logistical roles.

There are various models of megaships categorized into three main types. Most Megaships are Bulk Cruisers and cannot be docked with. Flight Operations Carriers are megaships with docking facilities. Generation Ships, which predate contemporary megaships, are derelict and also lack docking facilities.[1][2]

A number of megaships are mobile with a rotating flight plan, and they will jump to the next system on their itinerary either every week or every other week, while other megaships are stationary and can reliably be found at the same location.

All Flight Operations Carriers, also called Civilian Cruisers, support docking for conventional ships of all sizes, and feature a variety of services with the exception of Shipyards. The most common model of dockable megaship is the Wells-class Carrier, which offers a level of hospitality and functionality between an outpost and a starport. Detention Centres also function as Flight Operations Carriers and are open to the public, but have limited services. Generic Rescue Vessels can be found in systems with recently-damaged stations, but have limited services as well and will depart the system once the damaged station has been stabilised.

There are two types of non-dockable megaships. Bulk Cruisers are the most common. They often feature one or more text or audio logs that can be downloaded from Ship Log Uplinks using a Data Link Scanner. They possess no docking facilities, but commodities and materials can usually be salvaged near them. Some have unique names in addition to a class and ID code.

The second, much rarer type of non-dockable megaship is the Generation Ship. These feature audio logs that can be downloaded from Ship Log Uplinks. As Generation Ships are ancient derelicts from a time before humanity had developed the hyperdrive, they possess no docking facilities, nor any salvage.

Some megaships, most often Bulk Cruisers, can be interacted with to obtain commodities and materials:[3]

All current interactions are considered illegal, tying in with the changes to Crime and Punishment. These interactions provide criminal pilots gameplay options as well as give lawful players new locations to find wanted pilots.

If a Bulk Cruiser megaship is present in a system that experiences a Thargoid Incursion, it becomes damaged by a Thargoid attack and will remain trapped in the system until the Incursion is eliminated. While a Bulk Cruiser is in this damaged state, its available interactions change. 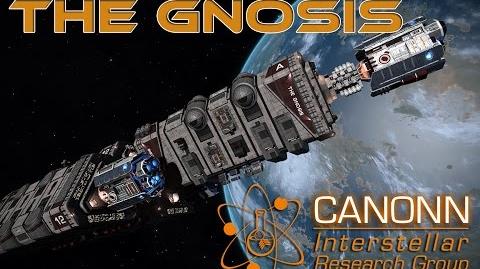 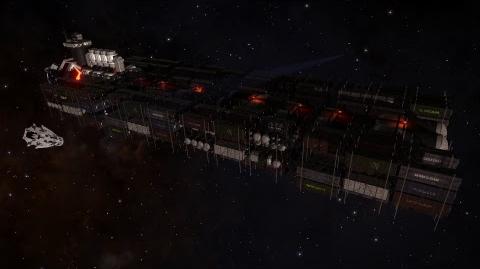 The Harmony, a Flight Operations Megaship

Rear view of a megaship

The Midas in Zeus

The size of main thruster of GSC Sarasvati