Mountains are a natural rise of a planet's surface with a summit or top. They're steeper than hills and usually over 600 metres tall (about 2,000 feet).

Mountains on low gravity planets and moons can be much taller than on Earth. Such as Jupiter's volcanic moon Io, which has 17 kilometer high mountain peaks (11 miles). That's much taller than the highest mountain on Earth, Mount Everest (8.8 kilometers).

From space, many mountain ranges may appear as tiny mole hills, but closer inspection can often reveal immense mountain ranges with complex feature variations. Planets without atmosphere make it more difficult to perceive height and distance.

The SRV provides adventurous Commanders with an opportunity to base jump from any mountain range. Popular destinations for base jumping include Mount Neverest, Pomeche, and Mount Wesley, which are among the tallest known mountains in the Elite Dangerous galaxy.

Mount Neverest is located inside The Bubble on the planet Nervi 3 A. Prior to version 2.2, the mountain extended over 50 km (31 miles) off the surface, which meant that pilots could fly through the central peak in supercruise. Gravitational effects were so distorted by the mountain's extreme height that Commanders could drive an SRV to the mountaintop where gravity would cease to function and an SRV could easily be launched into planetary orbit.[1] 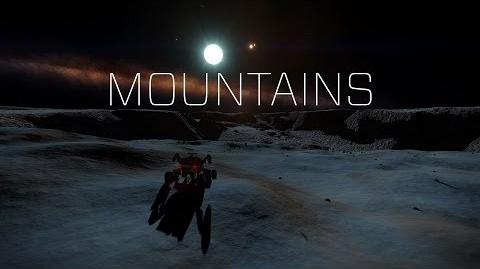 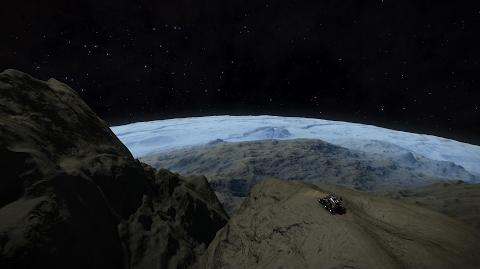 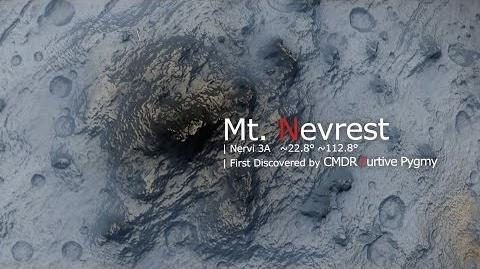 On a mountain on Charon

Deciat 4 mountain and an SRV

Mount Neverest on Nervi 3 A