The Onionhead flower is native to HIP 55118, and its seeds contain the well-known psychedelic narcotic. Illegal in most jurisdictions.

Onionhead, sometimes also spelled Onion Head, is a Legal Drug Rare Commodity exclusively sold by Harvestport in the Kappa Fornacis system. It is considered illegal in some systems, and transporting it can result in a fine or bounty if scanned by system security.

Onionhead is the fruit of an alien plant discovered in HIP 55118,[1] and it is now only grown on the planet Panem in Kappa Fornacis. The seeds of the Onionhead flower contain alkaloid compounds that produce a psychoactive effect in humans. Normally, the Onionhead plant must be cultivated in an entirely natural environment, and can survive for only a limited time in storage or in sub-zero temperatures. These factors have hampered farmers' ability to produce the plant in large quantities, and as a result, Onionhead is not widely available.[2]

Onionhead proved popular among young adults, who insisted that the drug was completely harmless.[1] President Jasmina Halsey was convinced otherwise, however, and outlawed the plant in the Federation on December 16, 3300.[3] Despite a devastating Federal Navy bombing campaign on Panem to destroy Onionhead farms and a blockade to prevent the drug from being exported to other systems, the Kappa Fornacis Farmers Union led by Georgio Algeria managed to resume cultivating and selling Onionhead in March 3301.[4] With the resulting profits, the Kappa Fornacis Farmers Union negotiated a trade deal with Senator Zemina Torval on June 18, 3301 that brought the system under Imperial control and protection, precluding any further Federal attempts to eradicate Onionhead.[5]

Three other strains of the drug, Lucan Onionhead, Onionhead Alpha Strain, and Onionhead Beta Strain, were developed from the original between 3301 and 3302 to circumvent Federal legal restrictions. Each strain required Federal authorities to analyse and catalog it separately, a loophole that created a temporary window during which new strains were technically legal in Federal space.[6] A fourth, highly-modified variant, Onionhead Gamma Strain, was obtained by the Blue Viper Club from an unknown research facility and then mass-produced by Kumo Crew in July 3307.[7][8][2] Onionhead and all of its variants are prohibited in all Federal and Imperial systems; they are also prohibited in all Allied systems except those controlled by anarchy governments.[9] The Coalition for Legalisation advocates decriminalising Onionhead and all of its variants, and promotes them as having therapeutic and medicinal value. 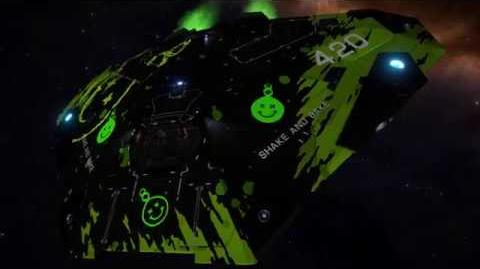