Start a Wiki
watch 01:06
Elite Dangerous Lore: Orca
Do you like this video?

The Orca is a high-end passenger ship manufactured by Saud Kruger, the market leader in civilian-transport vessels. Like Saud Kruger's other ships, the Orca can accommodate a luxury-tier passenger cabin, allowing it to transport passengers in comfort and style. The Orca has not been designed for combat or exploration, however, and its internal compartments cannot accommodate military modules.

The Orca is a ship manufactured by Saud Kruger. One of the galaxy's most popular passenger liners, the Orca combines Saud Kruger's signature sleek aesthetics and luxury accommodations into a relatively affordable package in the large-size ship range. As with other Saud Kruger vessels, it is capable of equipping Luxury-class Passenger Cabins, a manufacturer-exclusive feature. Although the Orca's initial specifications are not especially impressive given its heavy focus on passenger transport, with the right modules and engineering it can be transformed into a surprisingly manoeuvrable ship with above-average jump range. In most roles other than combat, the Orca can get the job done in style.

The Orca is essentially a passenger carrier version of the Type-7, sacrificing many of its upsides to focus on the passenger aspect, similar to what the Dolphin was to the Type-6.

Where officially its maneuverability is slightly better than an Anaconda and worse than a Beluga Liner, in practice the Orca handles far better than this rating suggests. It has a remarkably high turn rate, high acceleration and max speed, and is very good at strafing. However, its relatively small power plant and limited hardpoint capacity prevent it from becoming a great combat ship. It doesn't help that its large size makes it an easy target, its shield and armor hitpoints are mediocre for a ship of this size. One of the biggest downsides to the ship is the hardpoint placement; all of which are on the underside of the ship making it easy for ships to stay out of the Orca's firing range. This hasn't stopped a handful of Commanders setting up groups dedicated to combat in Orcas, and like any ship, it is still formidable with engineering and skilled pilots.

The Jump range can reach a rather impressive average of 36lys making it a very good explorer. This comes at a fraction of the price of the Anaconda, making the Orca a better ship for large distance than most others and this contributes heavily to its role as a cruise ship, letting luxury missions spanning many lightyears possible. Its range is still less than that of a Diamondback/Asp Explorer, which are both a fraction of the price and much better at self-defense.

As a trader or miner the Orca is a very bad option. In both aspects, the Type-7 is a far better option especially due to the Orca's huge pricetag. At only 192T of possible cargo it has the lowest of any large ship as well as low compartment space.

The biggest downside the Orca has is its pricetag; it is only slightly better at its roles than the Dolphin or Type 7 but at more than ten times the cost. It is also worse than the Beluga Liner at everything but jump range, commanders looking for passenger missions may choose it instead. The Orca is very good at carrying passengers long range, however because of the weight it's ill-advised to bring bulk passengers long range; at which point the Dolphin outclasses the Orca.

The Orca's heat dispersion capabilities are relatively poor, so caution must be taken when adding or engineering modules with a high thermal load. The ship is especially prone to overheat when scooping fuel.

The bridge is located on the bottom of massive window in the front of the ship, with the pilot's seat, on the left side. From there the pilot enjoys excellent viewing angles in all directions but down.

All ships are highly customisable through the Outfitting menu of Station Services. Listed below is the default load-out for the Orca. 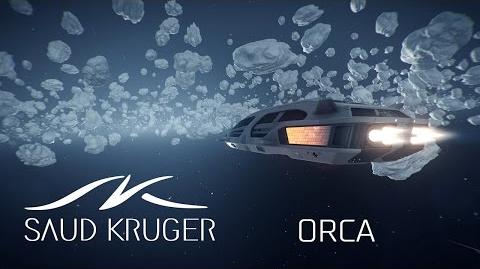 The Orca Elite Dangerous
Add a photo to this gallery

Orca with the Black Friday paintjob.

Orca mining within an Ice Ring.

Orca and an Earth-like planet

Orca rear side and a gas giant

Orca and an Earth-like, terrestrial planet

Retrieved from "https://elite-dangerous.fandom.com/wiki/Orca?oldid=126260"
Community content is available under CC-BY-SA unless otherwise noted.