Outfitting is a service available at most Stations and Surface Ports that allows pilots to buy, sell, store, install, remove, and swap different weapon and equipment modules for their ship. If a station has Outfitting available, it always also has Livery customisation as well. Outfitting can only be accessed once a ship has been fully secured within a sealed hangar; if a pilot attempts to access Outfitting while docked on an un-retracted Landing Pad, this will automatically cause the Landing Pad to begin retracting before the Outfitting menu opens.

Weapons provide a ship with offensive capabilities and are required for combat activities. All weapons come in one of three varieties: Fixed, Gimballed, and Turreted. Fixed weapons fire directly at the pilot's targeting reticule, are not affected by chaff, and are generally the cheapest and most damaging. Gimballed weapons can track target's within the pilot's line-of-sight, but can be temporarily rendered ineffective by chaff. Turreted weapons automatically track and attack any target within the weapon's line-of-sight, are also affected by chaff, and are generally the most expensive and least damaging.

Weapons also vary when it comes to the type of damage they inflict. Most weapons can only inflict one type of damage, but some can inflict two or three types at once.

A subset of weapons are mining tools, which are designed specifically for mining activities. They can technically still be used as weapons, but are extremely ineffective in combat.

Equipment modules are all non-weapon modules. They range from vital functions such as Thrusters and Life Support to useful tools like Cargo Racks and the Fuel Scoop, as well as Utility modules.

Utility Mounts are slots on the exterior of a ship where specialised Utility modules can be installed. Unlike Hardpoints, they cannot be retracted, but this does not interfere with other ship functions. Ships have between 2 and 8 Utility Mounts. All available Utility modules are listed below:

Cosmetics can be changed in the "Livery" section. Currently there are a variety of purchasable paint schemes, dashboard ornaments, external ship kits, and weapon colours in the official store. Decals are earned in-game.

Any module, whether Engineered or not, can be removed from a ship and stored at a station indefinitely at no cost. A pilot can store up to 200 total modules across all stations.

Since a ship requires all of its Core Internal modules to operate, if a pilot does not have a Core Internal module of the same type as they want to store already stored at a station that can be swapped into the ship, they are prompted to purchase and install an E-rated replacement first.

Stored modules can be transferred from one station with Outfitting to another for a fee. The fee and the transfer time vary depending on the distance between the two stations. 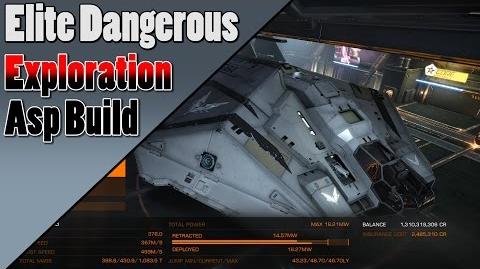