It is a big trading ship - a bit like the Lakon Type 9's big brother.

The Panther Clipper, also known as the Panther LX or Panther Clipper LX, is a "heavy cargo clipper". Frontier Developments has stated they expect this "trading workhorse to remain as popular in Elite: Dangerous as its predecessors were in previous games."[2]

In previous iterations of the design, the craft was one of the largest vessels in the spaceways in terms of trading, significantly larger than the Anaconda, and alleged to buy entire planets out of cargo. In this regard it can be seen as the next step upwards for a commodity-trader from the Type-9 Heavy, carrying significantly more cargo and able to hold multiple fighters in its hangar.

Being as it was one of the largest vessels in the space lanes and carried more cargo than any other freighter, it was also regarded as one of the slowest and most lumbering vessels yet capable of turret mounting planetary bombardment class weaponry that could destroy most enemies in a single well-placed shot. Panther pilots would blatantly ignore smaller pirate vessels as their shots bounced uselessly off of the ship's mighty shields.

The modern inception varies drastically in concept artwork from the original, the Panther was not an atmospheric vehicle and thus aerodynamics was not an issue, this bulky "flying brick" design was one of its key features and spoke more to its gargantuan size and use in non-atmospheric environments than its new implementation is rumored to be. In fact, the new version seems to be significantly smaller, and more akin to an Anaconda; it is unknown if there is a backstory on this drastic shift from design.

The following is leaked information from the Odyssey alpha version.

"The Panther Clipper LX is one of the largest ships likely to be owned by a private individual. It is also the largest ship that will fit in the internal docking bays of space stations. Piloting one requires real skill. Its cargo carrying capacity is massive, although like most transport ships it is lightly armed and poorly armoured."[3] 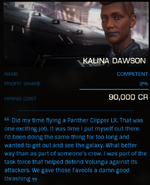 Retrieved from "https://elite-dangerous.fandom.com/wiki/Panther_Clipper?oldid=141024"
Community content is available under CC-BY-SA unless otherwise noted.