The Power Distributor is a module that regulates the distribution of power from the Power Plant between the ship's three main subsystems: Systems (SYS) which controls shield strength, Engine (ENG) which controls thruster output, and Weapons (WEP) which supplies power to weapon modules. It also includes a capacitor bank for each of the three systems, plus a three-way recharge capability that has increased or decreased effectiveness depending on its power allotment.

Power Distributors are rated by their energy-storage capacity (the maximum charge in each capacitor) and by their recharge rate (how many power units per second are recharged if that capacitor is at full four pips).

The recharge rate directly correlates to the number of pips the player has assigned to each system. For example, if the 1E Power Distributor (which has a Weapons Recharge rate of 1.200) has all four pips enabled for WEP, it will recharge at a rate of 1.2 power units per second. If it is set for two pips, WEP will recharge at 0.6 power units per second. This means you could fire a single Fixed Beam Laser for approximately six seconds before it depletes its available energy. If a power distributor is disabled it will function normally without the ability to change pip allocation. The power distribution will be what it was before it was disabled.

All Power Distributors are capable of recharging WEP considerably faster than SYS or ENG, and that SYS and ENG always have the same maximum recharge rate.

The following experimental effects can be applied to this module: 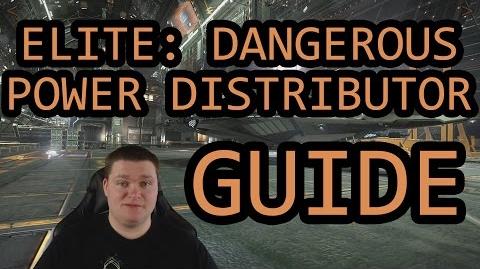