Procedural cities refers to full-scale cities that are made with procedural generation. These will probably be domed cities or have shields to protect against threats. A planet population could be billions of people. This is a highly anticipated feature.

On 1st March 2016, David Braben said: "There are very big challenges once you start talking about planets with populations that are measured in billions. You would expect cities and things like that. But I think futuristic cities is just thinking about their life cycle. They're likely to be protected by domes anyway. Just because if you think of the cycle of settling a planet. Chances are either life would be very threatening to you or there would be poisonous things in the atmosphere. So we might want to start off living in a dome and people might feel safer that way. There's lots of ways we can look at it, but the scale of things is always a challenge."[1]

The Guardians lived in domed cities as well: The war raged for many years and eventually destroyed the Guardians’ habitats, forcing them to retreat into ‘sacred’ domes protected by powerful shields. Eventually even the domes were destroyed, or their shields failed, and ultimately the population died out.[3]

The major factions will have distinct city patterns that can be viewed from space. Some human cities may not need domes such as shown in the megalopolis concept art.

On December 14, 2012, David Braben said “What I want to see down on the planet is interesting things, cityscapes, even animals, live trees, being a big game hunter. All of the things that we’ve been very, very excited about for a long time, we want to be able to realize. The amount of work required to create those things is so huge we want to do it properly."[5] 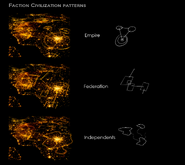 Procedural city lights on a planet
Add a photo to this gallery
Retrieved from "https://elite-dangerous.fandom.com/wiki/Procedural_Cities?oldid=99179"
Community content is available under CC-BY-SA unless otherwise noted.