Project Dynasty was a secret exploration initiative conceived by The Club in 3270. In response to the likelihood of a Thargoid civil war spilling into human space, The Club sought potential safe havens where humanity could flee in order to escape the conflict and survive. Project Dynasty was intended to identify Earth-like worlds beyond human space and mark them with beacons for later reference. The project focused on searching three galactic regions: the Scutum-Sagittarii Conflux, Hawking's Gap, and the Formidine Rift.[1]

In 3270, Frame Shift Drive-technology did not yet exist and Hyperspace travel took hours, and Auto Field-Maintenance Units were expensive experimental devices. Consequently, little exploration had been attempted outside The Bubble and the Conflux, Hawkin's Gap, and the Formidine Rift were entirely uncharted; the journey to the Formidine Rift alone would take a full six months, not including the return trip.[1]

The Club funded the construction of The Zurara, a state-of-the-art Megaship designed specifically for long-term exploration and equipped with the latest AFMUs, and also prepared a number of Anacondas. Their mission was to locate viable Earth-like worlds in their target areas, and mark them with beacons to serve as waypoints when the Thargoids invaded The Bubble and humanity needed a safe haven. To ensure absolute secrecy for as long as possible, the Project Dynasty expeditions were never intended to return after they had completed their objectives. In the case of The Zurara, it was sabotaged and stranded in the Formidine Rift with no power by sleeper agents who had been conditioned to sacrifice themselves. The project's other ships presumably met similar fates.[1]

Project Dynasty was at the core of what became known as the Formidine Rift Mystery. The Formidine Rift is a part of space around 10,000 light-years away from the Core Systems located in the Upper 2 quadrant of the Milky Way Galaxy. It was thought that the mystery might lead to the planet of Raxxla. The end result is located somewhere in the Rift. It has been in game since version 1.0.

The story behind the Formidine Rift mystery was written by Drew Wager in his book called Elite: Reclamation, which is one of several books in his series on Elite. Wagar confirmed there's something there to be found in-game.[2]

John Harper, author of And Here The Wheel, wrote in a Kickstarter comment:

"You don't know what I've seen. I've sailed beyond the Formidine Rift, seen the fleets of Octagonal ships blocking out the stars. I've stood on lost worlds, sterilised clean by the Thargoids and erased from humanity's maps. I've seen the graves from the Thargoid wars, countless headstones stretching beyond the curvature of the horizon, little spots of reflected light dottering the abandoned continent ..."

Commanders have been searching the Rift for years without much success up until the end of 2016 (3302 in-game date). Then finally, some navigation beacons were discovered in sectors located in that area of space. Those beacons had encoded location coordinates which were quickly revealed to the public.[3]

No one knows for sure what actually happened in the Rift. Commanders have been able to find a unique settlement down on one of the planets in the Formidine Rift region, while another has been found in Conflux. 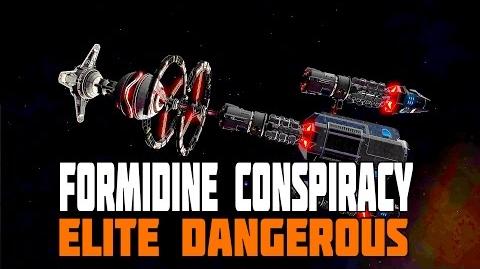 Unregistered beacons near the heart nebula and soul nebula