A pulse laser tuned to affect the electronics of the target ship and cause malfunctions along with reduced damage.

The Pulse Disruptor is a Pulse Laser that has a chance of causing module malfunction in addition to dealing damage. Module malfunction does not destroy the modules, it simply disables them temporarily. The weapon is a Power-specific loyalty reward for Felicia Winters supporters.

The Pulse Disruptor's subsystem malfunction effect does not trigger with every hit. The module malfunction capability is similar to the Scramble Spectrum experimental effect, but it affects only the module that is being targeted rather than a random one as Scramble Spectrum does. If modules are not directly hit with the Pulse Disruptor (i.e. through intentionally targeting them), a malfunction is unlikely to happen.[1] The Pulse Disruptor is also subject to Pulse Laser hull penetration percentages. Penetrating to Thrusters on a medium combat or multi-role ship such as a Python from the front is highly unlikely, although shots to the Thrusters from the rear once shields are down can be very effective.

Also, both effects do not stack, with each other or with themselves. No matter how many Pulse Disruptors or weapons with Scramble Spectrum a ship has, they will affect one module at a time in the target and will not cumulatively increase the malfunction time, although more hits will increase the chance of the effect being triggered. Both effects can stack with module malfunction caused by heat or battle damage.

In terms of combat damage, the Pulse Disruptor is best compared against a standard Class 2 fixed Pulse Laser, against which it has 39% of the DPS, 180% distributor draw, 179% thermal load and 117% power draw. 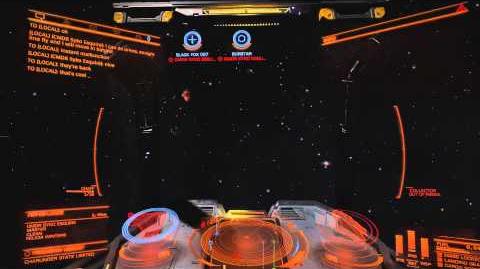