Start a Wiki
watch 01:29
Elite Dangerous Lore: Python
Do you like this video?

Manufactured by Faulcon deLacy, the Python is a multipurpose ship that offers an enticing balance of manoeuvrability, firepower and defence. With five hardpoints, it can go head-to-head with large ships such as the Anaconda and Imperial Cutter, while its agility allows it to handle smaller vessels without having to rely on turret weapons. The Python also has a sizeable cargo hold, making it a viable choice for those seeking a combat-capable freighter.

The Python is a ship manufactured by Faulcon DeLacy. An iconic model, the Python pioneered modular ship design and singlehandedly revolutionized space travel when it was introduced by Whatt and Pritney Ship Constructions in 2700, spurring the rise of the first independent pilots. The modern iteration of the Python continues to be a popular choice, effectively combining utility and durability into a single multipurpose craft that can easily take on a variety of roles.

The Python is considered by some to be the most effective balance between firepower, manoeuvrability, and protection currently available. In addition to being capable of holding its own against the larger Anaconda in a toe-to-toe frontal battle through its substantial protection and firepower, the Python is generally agile enough for its size to comfortably deal with smaller fighter classes without having to rely on turret mounts.

The Python can also serve as a heavily armed freighter in that it can carry 284 T of cargo with a Class 3 Shield Generator fitted, or 292 T with no shield fitted. Additionally, it is the largest cargo capacity of any ship that can dock at Outposts since it utilizes medium landing pads; because of this the Python is fantastic for Community Goals. Although the ship can achieve surprisingly high jump ranges with the proper modules and Engineering, additional mass from cargo can quickly drag this down and significantly lengthen the return leg of a trading loop.

In combat scenarios, the Python is more than capable of putting down most other ships. With 5 hardpoints and good placement even larger ships like Anacondas and Imperial Cutters must operate with caution in a fight against a Python. Furthermore, it has a staggering Mass Lock factor of 17; not only is this much higher than almost every other medium ship, tying with Krait MkII, it can even mass lock large ships such as Orcas and Type-9s making the Python an excellent choice for Pirating and Bounty Hunting as it has more than enough firepower to cripple targets before they can flee. The ship has one fatal flaw, however; its manoeuvrability. It has less manoeuvrability than other medium ships such as a Fer-de-Lance or Alliance Chieftain meaning it will often lose in a 1V1 scenario with either ship as manoeuvrability is an important factor in smaller ship combat. It also struggles against the small Vulture, which can easily stay under the ship and avoid fire. Utilizing turret-style weapons on the nose and medium hardpoints can help in combat if this becomes an issue, which allow for better firing arcs than the remaining pair of heavy hardpoints. Power is also a problem as the Python will struggle to keep all 5 hardpoints as well as utility mounts and Shield Generator powered. Engineering the Python is highly recommended to avoid this issue.

The Python can also serve as a competent Explorer; whilst it can't quite match the Diamondback or Asp Explorers for jump range, it can come close with a Class 5 Guardian Frame Shift Drive Booster (and still has a healthy jump range without one), and its well-balanced array of optional internal slots gives it plenty of room for exploration equipment without sacrificing protection. Finally, its hardpoints can be loaded with weapons to deter pirates, or left empty to save on weight.

The weapon hardpoints are located as follows: two large hardpoints located either side of the ships spine around the midship, and two medium points located slightly behind the cockpit. The final large hardpoint is located on the underside of the nose section. The nose-mounted hardpoint has a good 180° field of fire when gimballed or turreted (considering its location) which gives the Python a good field of fire where all weapon hardpoints can track and hit a target (when gimballed or turreted).

The Python has an available 16 piece cosmetic ship kit that can be purchased from the Frontier store which allows you to "remodel your ship in your personal style". The ship kit does not affect gameplay.

All ships are highly customisable through the Outfitting menu of Station Services. Listed below is the default load-out for the Python. 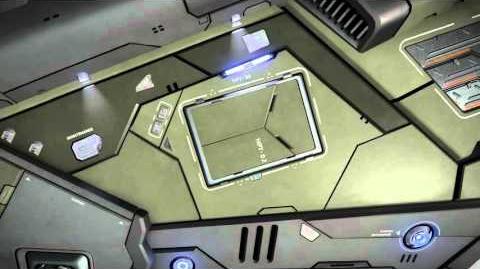 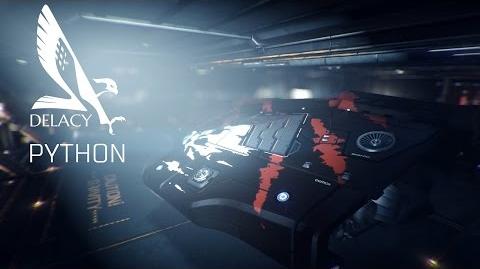 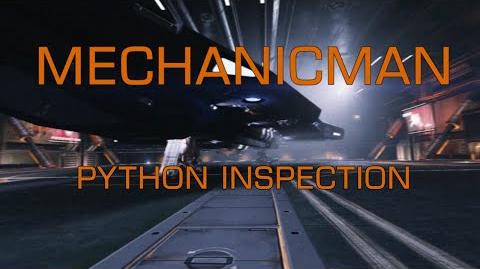 The Python Elite Dangerous
Add a photo to this gallery

Python by a Blue Binary

Vibrant Yellow Python on the ground inside a settlement, SRV approaching

Python hovering above a desert planet

Python cockpit and a pilot

Python docked in a hangar
Add a photo to this gallery
Retrieved from "https://elite-dangerous.fandom.com/wiki/Python?oldid=126267"
Community content is available under CC-BY-SA unless otherwise noted.