Settlements are on planet surfaces. Unlike Surface Ports, ships and SRVs cannot dock at Settlements, as they do not possess any Landing Pads. Settlements do not display in the contacts panel of the HUD.

Settlements can be guarded by Skimmers, anti-SRV turrets, and anti-ship defence turrets. Depending on their security level, they can have no-fly-zones and areas which are off-limits to SRVs. Trespassing in these for too long, accessing private data towers, attacking the defenders, or destroying generators can trigger the settlement defenses and, trigger a fine or bounty if the controlling faction is not lawless.

The vast majority of Settlements, numbering in the thousands, are generic locations with visible navigation markers on the planetary surface view of the System Map. The size of these Settlements is indicated by a varying number of + signs: the more + signs, the bigger the Settlement. A Settlement without any + signs is usually only one or two buildings. Generic Settlements are often selected as target locations for certain types of combat and sabotage missions.

Some Settlements are unique, and distinguished from generic Settlements by several characteristics: they do not initially have markers in the System Map (activating any local data beacons may cause a marker to appear from then on), they rarely have any active automated defenses, they are not used as targets for any missions unless there is a Tourist Beacon integrated into the site, and most have unique data logs. A subset of unique Settlements can be found by following listening posts.

There are abandoned Settlements which do not have interactive objects apart from recoverable data logs and data beacons. One of the most well-known is the mining settlement Dav's Hope in Hyades Sector DR-V c2-23, where plentiful Manufactured Materials can be salvaged.[1] Known abandoned Settlements are listed below.[2]

The now-defunct Intergalactic Naval Reserve Arm operated from a number of covert bases during the first conflict against the Thargoids in the 32nd century. A number of these bases were rediscovered in late 3303 as new Thargoid incursions occurred in the Pleiades Nebula and Core Systems, and audio logs recovered from the bases shed light on INRA's unethical actions and betrayal of the famed CMDR John Jameson.

Since June 28, 3304, independent pilots have found a number of abandoned settlements that had been attacked by Thargoid forces. While some of the settlements managed to evacuate before they were attacked, others were not so lucky. Recovered logs indicate that some survivors may have been abducted by the Thargoids.

There are various interactive objects which can be found at both unique and generic Settlements:

Data Point at a Settlement 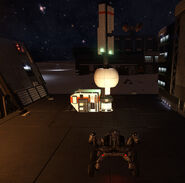 Missions can feature generic Settlements as targets, and ask for a specific data tower to be accessed or a specific generator to be destroyed. The official Settlements - Elite Dangerous: Horizons Pilot Training video has a detailed explanation.

For example pirate factions give Destroy the Generator missions where the commander must destroy a defense system power supply.

For Power Generator missions it says you need an SRV, but you don't necessarily need to use it. Scout the area with your ship until you find the lone generator or the multiple generators. Once you find it, make sure your ship has dumbfire missiles outfitted. Get close enough so the anti-air guns don't shoot it out and fire the missile. You will get the mission complete status.

It's honestly that simple. Scouting in your ship allows you to get in and out before the trespass alarm sounds off. Missiles are easy, quick ways to take out the generator in one go. They also don't use any WEP pips. Just approach with 4 in SYS and 2 in ENG. You will need the shield defense, but you won't need to stay in there for long if you get the first shot off onto the generator. The alarm doesn't go off when the missile fires, it goes off when the missile destroys the generator.

These are generators that can power many different buildings such as weapon batteries or comms dishes. They can be disabled by firing at them. They don’t appear on your sensors until you're relatively close. So they can sometimes be tricky to locate. There are normally several and you need to take out the right one.

Some Settlements are guarded by several Defence Turrets of varying sizes; both small anti-vehicle turrets and large anti-starship batteries.

Force Fields block both ground vehicles and bullets. They often block ramps and can be disabled by destroying a nearby generator. Some high security settlements will have gates that close on you if you enter a restricted area. 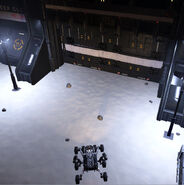 Some missions will ask you to destroy a generator attached to a turret under the transaction tab but, you actually have to scan a Turret Security Terminal (Horizons 2.01)

Small settlement and a Python

Settlement and a Diamondback Explorer
Add a photo to this gallery

Retrieved from "https://elite-dangerous.fandom.com/wiki/Settlement?oldid=135146"
Community content is available under CC-BY-SA unless otherwise noted.