The canopy is the transparent enclosure over the ship cockpit. The tinted canopy protects the pilot and cockpit from radiation and other hazards. Life Support provides a breathable atmosphere inside of the ship.

Much of the upper HUD is displayed or projected on the canopy. This includes active weapon group, currently selected target and information, supercruise orbit lines and object markers, and weapon targeting reticules. Alerts (i.e. heat warnings, incoming missile, etc.) are also shown on the canopy.

If the canopy is shattered, all information displayed on it will be lost. It still exists (i.e. missiles will still lock on, gimballed weapons will still track), but is no longer visible to the pilot unless viewed from an intact fragment (e.g. a canopy shattered in front will still remain functional from the sides). All auditory cues from COVAS are muffled. More critically, the escape vector for supercruise from gravitational wells and escaping interdiction will not be visible.

Loss of canopy HUD, apart from being potentially lethal, can also be highly detrimental for pilots who keep fighting for precious minutes more before they go to a station for repair, especially with fixed weapons.

The lack of supercruise target distance and arrival time estimate can also make it difficult for a pilot to judge whether they will have enough time to get to a chosen repair destination or even when they are close enough to safely drop out of supercruise. Pilots with shattered canopies are advised always to seek the nearest port with repair facilities and a pad able to accommodate their ship as soon as possible, although naturally some pilots are more impetuous than others.

The size and viewing arc of the canopy depends on the model of ship. A bigger canopy gives better all round vision which is handy for dogfighting and occasionally just sightseeing. In general, however, the bigger the canopy, the greater the chance that it will take damage. This is especially the case when fighting enemies armed with explosive weapons such as Missile Racks, as the area effect means that even glancing hits can very easily crack or even shatter a ship's canopy.

Module Reinforcement Packages help reduce damage to the canopy, but some ships have more vulnerable canopies due to their size in relation to the rest of the ship, ship layout, or even just the kind of combat style enforced by the ship's flight characteristics. Ships notorious for having a canopy that becomes broken during even light combat include the Asp Explorer and Vulture, as both ships have large, frontward bubble canopies that make for easy targets.

Sound requires solids, liquids, or gasses to travel through. Since space is a vacuum, there is no matter through which sound can travel. The speaker array inside the cockpit of a ship simulates all audio activity outside the ship in real-time, thus creating the illusion that the pilot can hear sounds in space. When the canopy breaks and vents atmosphere, sound no longer has any air to resonate with, rendering the speakers useless. At this point, the pilot can only hear themselves breathe in their suit until they repair their canopy.[1]

The canopy can be damaged by trauma such as impacts, hull stresses (for example, an emergency FSD drop), severe gravitational hazards and weapons fire. Damage to the canopy, once sufficiently severe, results in visible and audible cracking. This will worsen if more damage is taken, until the canopy dramatically shatters. If this happens, the ship's atmosphere will vanish into space. A Remlok Survival Mask instantly deploys from the pilot's suit to protect the wearer against oxygen depletion and the vacuum of space. This however leaves the pilot with a limited time to reach a station for repairs. As noted above, sound no longer has air to resonate with so it becomes quiet.[2]

Ice starts forming on the canopy if the ship's temperature falls below 10%, which can occur after shutting down modules or dropping a heatsink. Ice presents no danger, and is simply a cosmetic effect.

If the pilot is not able to reach a station before the oxygen runs out, then they will be forced to eject and the ship will be counted as destroyed. The available breathable oxygen time depends on the rating of Life Support fitted to the ship (as low as 5 minutes for E-rated, and as high as 25 minutes for A-rated), but it can also be refilled via Synthesis, which requires only 2 Iron and 1 Nickel per refill. Pilots with large stockpiles of both Materials can replenish their Life Support and potentially continue traveling with a broken canopy for hours. Synthesis requires a brief activation period before the refill takes effect, however, and Life Support cannot be "over-filled" by repeating the refill process in quick succession.

Passing through the force field in a Starport's Access Corridor or entering the Landing Pad hangar on an Outpost, Fleet Carrier, or Surface Port will return the ship to a breathable oxygen atmosphere and halt the countdown, though obviously it will restart if the canopy is not repaired and the ship returns to vacuum. Docking will refill the Life Support oxygen supply, however.

A damaged, unbroken canopy can be repaired outside of a station either by use of an Auto Field-Maintenance Unit or Repair Limpets, but once completely shattered it can only be repaired at a facility with Landing Pads and repair services. A shattered canopy far away from inhabited space will usually therefore result in the loss of the ship, and experienced explorers are known to keep close track of their canopy's status. 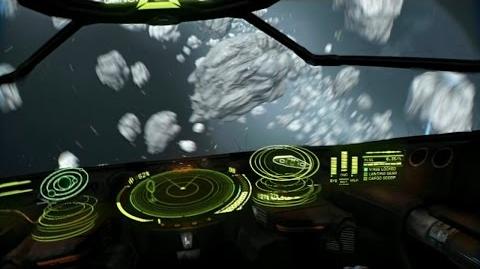