View source
watch 01:41
Why It's Crucial to Outfit Your Ships By Type and Stats
Do you like this video?
Play Sound

Ships are the central feature of Elite Dangerous, and are used to traverse space and perform a variety of different tasks. There are a variety of designs to suit various roles. Many ships were inspired by the classic wireframe and polygonal models of previous Elite games.

Each ship has access to a range of different modules which they can fit to help specialize as traders, smugglers, bounty hunters, pirates, etc. All ships have been designed with the ship interiors in mind and for future gameplay opportunities.

As of Elite Dangerous: Beyond Chapter Four (3.3), there are 38 playable ships and 6 playable fighters, each built by one of several manufacturers with their own unique styles. Initially, there was a planned total of 30 playable ships with multiple variants in addition to some non-playable ships.

All commanders begin the game with a Sidewinder MkI. The player may upgrade components or purchase an entirely new ship based upon their needs and available funds. New ships can only be purchased at Stations with the Shipyard service, and modules can only be changed or upgraded at stations with the Outfitting service.

People can join other ships as a hologram with multicrew. Nearly all ships and stations are standard fitted with the GalNet system for market information, galactic news and communication.[1][2]

All ships available to players are presented below. Some ships require attaining a specific rank with the Federal or Imperial navies before they can be purchased.

Small ships are designed to dock with small Landing Pads.

Medium ships are designed to dock with medium Landing Pads.

Large ships are designed to dock with large Landing Pads.

The following spacecraft can be purchased by players, but are not classified as conventional ships.

Ship-Launched Fighters can only be deployed from Fighter Hangars installed on suitable ships. They cannot be customised in Outfitting apart from their Livery, and they lack their own Frame Shift Drives.

Capital Ships are large jump-capable ships that cannot be directly piloted by the player. Capital Ship owners can customise their vessels' available services and Livery.

Default ship specifications as equipped when purchased. Sidewinder can be obtained for free.

A-Class Frame Shift Drive, Thrusters and Power Distributor and lowest mass on everything else except Fuel Tank. All Internal Compartments are Cargo Racks. Power Plant is the lightest available with sufficient power.

A-Class everything, Bulkheads as Reactive Surface Composite which is the most expensive part of a ship. Hardpoints, utility mounts and internal compartments empty except Shield Generator which is highest possible size.

Multipurpose ships are a jack-of-all-trades in that they can easily be fitted for whatever role the player needs; whether it be hauling cargo, ship-to-ship combat, or exploring the stars, multipurpose ships can do it all. Multipurpose ships usually can do most jobs just as well if not better than comparable ships targeted towards those jobs. They, while considered multipurpose, sometimes lean into a more specialized role. The Imperial Courier, for example, is called multipurpose while ending up being a superb combat and exploration vessel, as it isn't very good at trading/mining.

Combat ships are usually faster, more agile and more heavily armed than other ships of the same size. The exception to this would be gun boats, which have more weapon mounts designed for turrets, but sacrifice their agility for them.

Exploration ships typically come with large default jump ranges, large Fuel Tanks for ships of their size, and should be fitted with lots of low class Internal Compartments for scanners to optimize jump distance. These ships are designed to be able to equip the multitude of scanning equipment needed for an expedition, then fly long distances into the void without the need for regular refuelling through the use of Fuel Scoops.

Couriers who fly passengers and valuable items with small storage requirements have a special class of ships available to them. These ships are elegant and fast, designed to quickly and comfortably get from one system to the next. You can think of them as giant space-limousines.

We're designing all the ships with the interiors in mind. How the cargo is unloaded all of that sort of thing, how damage occurs. That's because another thing we are doing is, again down the line, is that you will be able to walk around inside your ship. You'll be able to get out of your ship, walk around inside space stations, other vehicles. All of that sort of thing. We've shown the damage on the ship, the damage models. Imagine looking at that from inside the ship outwards seeing your cargo fly out into space, seeing the flames trying to fight them. All of those things that we plan with time, they won't be at the first release, because we want to do them right, we want to do them well. All of these will be done as updates. The game has to be structured in a way to allow it from the start. So we're designing the ships so that they work that way and so that when we come to do it, it's not a problem.

All playable ships in Elite Dangerous were designed in such a way that fully-modeled interiors can be added to them in future updates. Combined with other potential features, such as On Foot functionality, this would enable players to move around within the entirety of their ship, rather than remain confined to only the cockpit. During the very early stages of development for the game, David Braben expressed a desire to eventually implement ship interiors in order to add more complex gameplay opportunities such as boarding and stealing other ships, and manually repairing both external and internal ship damage.

As of June 8, 2021, shortly after the PC launch of Elite Dangerous: Odyssey, ship interiors were not in active development, and Frontier Developments was focusing on improvements to Odyssey and preparing for its launch on consoles. Frontier community manager Arthur Tolmie (CM Arf) said on LaveRadio: "I can relay the message as best I can. If players are saying ship interiors are an absolute must, obviously we'll assess it, but at the moment it's a case of where do we put our resources, and at the moment it's not ship interiors."[4][5]

There are currently two types of Capital Ships in-game: the Federation's Farragut-Class Battle Cruiser and the Empire's Majestic-Class Interdictor. Both vessels are Battlecruisers. They are heavily armed, can launch several fighter squadrons, and are piloted by NPCs. However, Frontier said in their roadmap that they intend to add the "availability of giant ‘executive control’ ships to players" in a future content update.[6]

In The Commanders Livestream, a viewer asked "any chance of playing capital ships in the future?", David Braben answered: "it's on the list, but a long way down it, because there's a lot of gameplay to make it work. The issue is what we call the difference between direct control and executive control. Where rather than flying by the seat of your pants you're giving orders to a giant ship. Because you can't expect it to change course very rapidly and that sort of thing. So it's certainly a long-term possibility, but it's long-term."[7]

A Megaship is a class of massive ships that travel through the galaxy, and are utilized in a wide variety of roles.[8] Comparable in size to most stations, and in some cases much longer, a number of Megaships are also equipped with docking facilities for small, medium, and large vessels. All services normally available at stations are on offer, with the exception of the Shipyard. Currently, only NPCs can directly control Megaships, but certain Player Groups can petition for Community Goals to construct new Megaships, and those with docking facilities are usually placed under the control of the sponsoring Group's Player Minor Faction. Even more rarely, a Player Group may be permitted to relocate their Megaship to a different location, as with The Gnosis.

There are various types of Megaships:[8]

The Thargoids are known to have at least three ship types in their arsenal: Thargoid Scouts, Thargoid Interceptors, and Thargoid Motherships. Of these, both Scouts and Interceptors have been encountered thus far, whilst old logs retrieved from the Intergalactic Naval Reserve Arm's Carmichael Point base attest to the existence of Motherships.

Thargoid vessels employ radically different technologies from human ships, among them the ability to interdict ships during hyperspace transit and to make hyperspace jumps without leaving an identifiable wake signature. Their powerful offensive and defensive capabilities also make them deadly opponents in combat.

The fleet-class ships that are available to the game's major factions follow a hierarchy.[10]

Long range, independent ships that are capable of controlling entire systems. Heavily armed and capable of deploying large fighter squadrons. The capital ships already shown are an example of this class. In the Empire they are usually known as “Interdictors” – named after the first successful class of cruisers. Currently the most common and most successful Imperial Cruiser is the Majestic-Class – generally referred to as a “Majestic-Class Interdictor”. As ships that can also carry out ambassadorial missions they can be used for ‘soft’ power projection, as well as hard, the same goes for the Federation's most common and successful Cruiser, named the Farragut-Class Battle Cruiser.

These are large ships designed for escort duties. The actual vessels vary greatly between navies, but are all designed to engage multiple small, fast enemies (typically fighters and missile swarms) and are loaded with point defence batteries. They will also have some anti-ship capability, but are not designed to go up against other warships.

These are anti-warship vessels, but are generally no longer used in the front line, though some are still in service.

Carriers are designed for the deployment of fighter squadrons. They have been considered obsolete and phased out of the fleets of the major factions due to the popularity of Cruisers, but small navies still make use of them and some have even been converted into transporters.

The 34th century saw the resurgence of Carriers with the introduction of the Drake-Class Carrier, a product of Brewer Corporation.

Light multi-role warships, capable of reconnaissance, incursions and escort missions. These small warships are also popular with smaller factions, organizations and even wealthy individuals due to their adaptability. The Federal Corvette is a slower Corvette-class Ship with more maneuverability and firepower, while The Imperial Cutter is a lighter and faster Corvette-class ship, players will be able to get their hands on these ships in the game (assuming they can make the right contacts).

Small short-range craft that generally cannot operate independently due to having no jump capability. Their main roles include the defence of stations and the large warships that they are deployed from. Commercial fighters are typically jump-capable and are therefore much more flexible than their faction-specific counterparts.

Small automated ships that have largely been phased out due to the existence of effective counter-measures. The closest setting-modern analogue would be Limpets, which are used almost purely for logistical/support tasks such as field repairs rather than direct combat, though some can be used for sabotage.

These are important ship building companies. 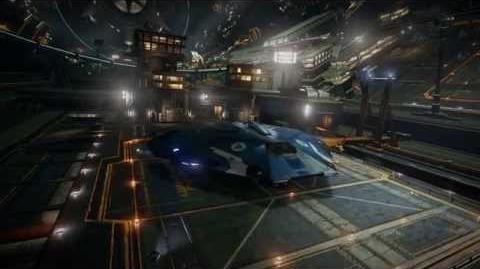 Designing the Future - The Ships of Elite Dangerous 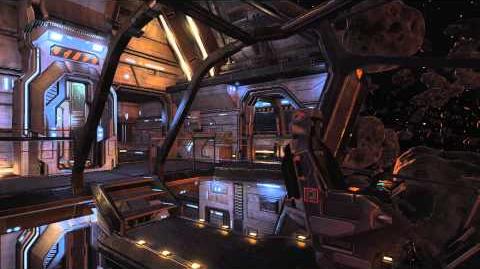 Station docking with a Boeing 747 and Imperial Courier 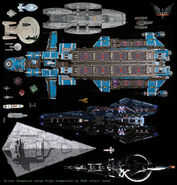