Cannon capable of firing almost as fast the trigger can be pulled, firing very accurate, fast moving energy projectiles that can do high damage if successive shots land. The weapon has a built in auto loading action that will slowly reload over time. If the clip empties completely, a longer full reload will be undertaken.

The Shock Cannon is an experimental weapon that can be unlocked through a Technology Broker. Shock Cannons are rapid-fire semi-automatic weapons that fire fast-moving energized projectiles, dealing kinetic damage on impact. They also have a built-in reloading system that replenishes ammunition automatically even when the weapon is being discharged.

In terms of statistics and performance, Shock Cannons sit somewhere between Cannons and Multi-cannons, though they have the highest potential DPS of the three. Their primary drawback is very high heat generation when fired rapidly, which limits how fast they can effectively be fired compared to their actual maximum rate of fire.

As with other Experimental Weapons, the Shock Cannon's Turreted variants only operate as Turrets when under the control of a Multicrew gunner. Without a gunner, they operate as a Fixed weapon instead.

Different modes and classes of the Shock Cannon can be permanently unlocked for purchase by providing the following Materials to a Human Technology Broker:

It is not possible to Engineer Shock Cannons at this time.

The Shock Cannon is available for purchase at all stations where a Human Technology Broker is present after the module has been unlocked. 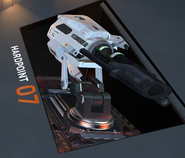 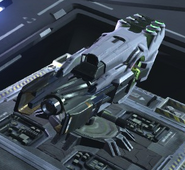 Class 3 Shock Cannon
Add a photo to this gallery
Retrieved from "https://elite-dangerous.fandom.com/wiki/Shock_Cannon?oldid=134500"
Community content is available under CC-BY-SA unless otherwise noted.