Heatsink Launcher
Power Plant
Thrusters
Cargo Rack
Passenger Cabin
Smugglers are similar to traders except that they sell goods where it is illegal, on the black market. Smugglers have to use stealth, cunning, and special equipment to outwit any local law enforcement and sometimes military authorities, especially around stations, to sell their commodities at a profit while escaping fines and a criminal record. Smugglers can also be a special case of couriers, where the player is asked to transport forbidden items.

When dealing in stolen items looted from wrecks or from piracy, smuggling is also necessary as cargo is tagged and detection of stolen goods on a ship will carry consequences as well. For this reason, most pirates are also typically skilled in smuggling items into stations.

Smuggling usually involves the sale of two types of commodities: illegal commodities, which are prohibited in certain systems and stations by the laws of a specific minor faction, and stolen commodities, which have been tagged as having been criminally obtained from their legitimate owners. These commodities can be obtained from a variety of sources, such as salvaging wrecks, raiding Settlements, pirating other ships, or even simply purchasing them from stations where they are not considered contraband. One commodity that is popular among smugglers is Imperial Slaves, which can be purchased legally from stations under Imperial control, but are illegal in most other systems and can be sold on the black market for a decent profit.

The goal is simple: enter the station without your hold being scanned by either players or police forces. There are multiple ways to get inside of a station without being scanned, which differ based on pilot skill, ship type, and station. It is far easier to smuggle in a smaller vessel, and larger ships will find the task to be not only difficult without detection, but extremely dangerous to the ship.

The most important thing with smuggling is to get your ship under 20% heat to reduce the range at which other ships can scan you, making stealth much easier.

Docking at Outposts and Planetary Ports

Smuggling to outposts and planets is significantly riskier than smuggling to starports. When landing at an outpost, or on a planet, you do not have a mail-slot that stops your scan. To be un-scannable in these situations you must land and retract your ship underground. Outposts in general have low occurrences of patrol ships. If there are patrol ships, enter supercruise and return after a short while: it will be likely that the patrol ships will have left the area. Planetary installations usually come supplied with patrol ships flying around the surface near the space port. The number will depend on the security rating of the system you are in.

A sufficiently-skilled pilot is able to accomplish the task of entering the station without any special preparations, by requesting docking at a distance and then entering the station at considerable speed. This method is, when performed by a skilled pilot, by far the fastest and most likely to succeed undetected, but carries the highest consequence when failed: impact with the station and immediate destruction.

Smuggling is a crime that incurs penalties if the smuggler is caught. If System Authority Vessels finish a scan on the player's ship while it is holding illegal or stolen cargo they will be fined and their reputation with the star system's controlling faction will drop. It is recommended to not smuggle in systems where the controlling faction is one that you want to continue to be friendly with.

If a pilot is caught transporting wanted criminals, the penalty is very severe. Being scanned with a criminal onboard incurs an immediate bounty; if the pilot is inside a Starport or Asteroid Base and not docked at the time a bounty is placed, the station's interior defence turrets will fire upon their ship. 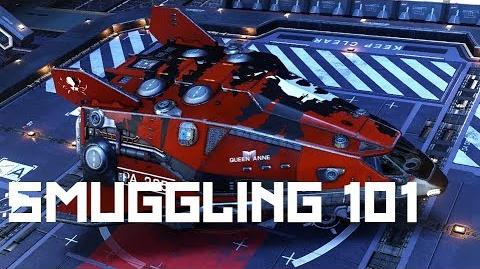 Elite Dangerous How To Make Money Smuggling The Hauler