Suits are standard gear for commanders aboard their ships and on the ground. Different suit models offer different tools and functions. Originally, only the default Flight Suit was available, but three other models were added in Elite Dangerous: Odyssey.[1][2] Suits can be upgraded, modified, and saved to Loadouts.

All space suits provide breathable air and limited protection from vacuum and extreme environments as long as they are powered. Shields can also be activated to absorb a limited amount of weapons fire, and are a must in combat situations because an unshielded suit is relatively flimsy against kinetic, thermal, plasma, and explosive damage sources.

Suits also have finite tolerances for extreme environments. They can only withstand gravitational forces up to 2.69 G, and temperatures up to 700 K. Automatic safety features prevent suited commanders from disembarking from their ships if the external environment exceeds these limits. A suit will also need to expend additional energy to regulate the wearer's body temperature in environments that fall above or below an approximate safe zone of 182 K.[3][4] In the event a commander disembarks from their ship on the dark side of a planet where the temperature falls under the 700 K limit, then crosses over to the light side where the temperature is higher, their suit will be unable to compensate for the added heat and they will begin sustaining health damage.

Venturing into an especially hot or cold environment, activating shields, or using the suit's built-in flashlight all cause faster suit battery drain. When a suit battery nears exhaustion, it will automatically terminate non-vital processes such as the flashlight to try and extend battery life. When a battery runs dry, the suit will stop producing air and the wearer will suffocate. Suits will not expend power when the wearer is in a normalised enviroment with breathable air.

Suit batteries can be replenished with portable Energy Cells, or by using an Energylink to draw power from a Suit Recharge Socket, which can be found at station Concourses or inside settlements.

Suit backpacks are also equipped with a limited jetpack function that can allow the wearer to jump to significant heights or leap great distances, especially on low-gravity worlds. Using a backpack's maneuvering thrusters quickly drains the suit battery, but can provide an advantage in combat situations or be used to quickly reach areas that are otherwise difficult to access, such as settlement rooftops.

Certain Components and Goods can be used to upgrade a suit's resilience and allow more Engineering modifications to be added to it. New suits begin at Grade 1, and can be upgraded to Grade 5. Pioneer Supplies locations occasionally stock suits at higher grades that may also come with one or more Engineer modifications pre-installed; these high-grade suits are one-of-a-kind and cost substantially more than normal stock.[5]

Modifications can be installed on suits by unlocking and visiting Engineers who specialise in pilot equipment. Each modification requires a one-time payment of items and credits to install. Note that once a modification is added, it cannot be removed from the suit or replaced. If other modifications are desired, another suit of the same model must be purchased and upgraded to hold those mods. Multiple specialised Loadouts can be created to prepare for different situations. 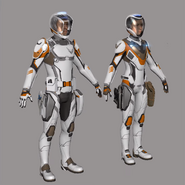