Supercruise is a method of faster-than-light (FTL) travel within star systems. A ship that is in supercruise can use the Frame Shift Drive to travel at speeds between 29.9 kilometers-per-second to 2001c superluminal (faster-than-light) speeds. It allows a ship to cross entire systems in a relatively short amount of time.

Supercruise uses the ship's Frame Shift Drive to compress space in front of the ship and expand it behind the ship, essentially moving space around that ship. This negates any time dilation, as the ship is always travelling less than the speed of light relative to its "frame" of compressed space.

In supercruise, speeds are typically measured in multiples of the speed of light, represented as c or in megameters per second, represented as Mm/s (1c = 300Mm/s). A ship that is traveling at 1c is therefore traveling at the speed of light. Speeds in supercruise are highly dependent on distances from large bodies of mass, and the maximum speed of 2001c is only possible at great distances from massive objects, requiring almost an hour of supercruise travel away of all stellar bodies.

It should be noted that in Elite Dangerous, FTL travel is not subject to relativity; a ship's frame of time is always the same as to the surrounding universe.

There are a number of circumstances under which Supercruise may be exited, but they all fall under two general categories: Safe Disengage and Emergency Drop.

The following circumstances end Supercruise in a Safe Disengage. In all cases, the Frame Shift Drive has a safety cooldown of 10 seconds before it may be charged again and the act of ending Supercruise does not damage any part of the ship.

Approaching a Starport in Supercruise

The following circumstances end Supercruise in an Emergency Drop. In all cases, the ship's hull and all modules take 1% to 2% damage (without exception) and the Frame Shift Drive has a safety cooldown of 40 seconds (unless otherwise noted). 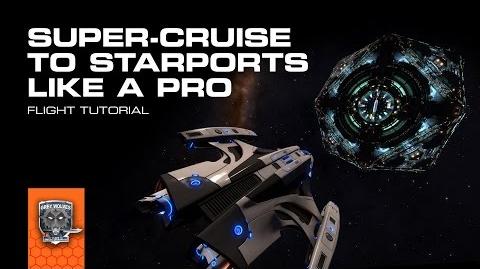 SUPER CRUISE TO STARPORTS LIKE A PRO - Flight Tutorial-0 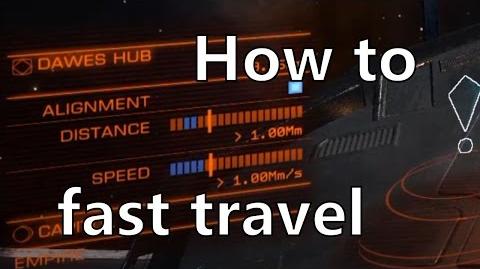