Elite Dangerous Wiki
Register
Don't have an account?
Sign In
Advertisement
in: Thargoids, Structures, Points of Interest,
and 2 more
English

At first sight the central column looks very much like a regular, sea-based barnacle sitting on the ground. However, closer up, it appears to consist of a number of individual obelisks making up the structure. At ground level the obelisks do not quite meet, leaving gaps through which a more organic looking material can be seen which radiates a blue-green light. It is approximately twice the height of a Scarab SRV.

The peaks of each obelisk is coloured a creamy white, with a strange symbol visible on the side. This is currently the cause of much speculation amongst commanders with many believing it to be a reference to Barnard's Loop, an emission nebula in the Orion constellation.

After September 26, 3303, CMDRs began discovering much larger clusters of Alien Structures aka "Barnacles". These clusters had grown into a roughly octagonal shape, with crystal-like formations erupting from the ground and linking them together. It is possible that these large clusters are the precursors of future Thargoid Surface Sites. It's also called a Barnacle Forest due to the large scale.[2]

Thargoid Barnacles have thus far been entirely unresponsive to all attempts at communication as well as attacks, and they are also impervious to damage. Ships and SRVs cannot directly target them, and they do not appear on scanners.

When nearby, a strange sound can be heard coming from it, which sounds similar to an Unknown Artefacts, but rather sounds more like an animal noise.[3]

On June 2, 3303, CMDR Mobiusetti documented the first known interaction between a Thargoid Interceptor and Barnacles on Pleiades Sector OI-T C3-7 A 6 at coordinates -42.77, -21.70, confirming the two are related. The Unknown Ship approached one Barnacle, incapacitating any nearby ships and SRVs. The craft then rotated until its propulsion array faced and was aligned with the Barnacle, before drawing a pulsing beam of light or energy from it for a brief period. The Unknown Ship then departed as rapidly as it arrived. It is possible that Barnacles serve as refueling stations of some kind for Unknown Ships, and the Meta-Alloys they produce are fuel or repair materials for them, but this is currently only conjecture.[4]

It has been observed when a Thargoid Interceptor visits a Thargoid Barnacle site, the Barnacle releases a cloud of green "particles".[5] The Interceptor deploys a shield with a similar appearance when it receives enough damage to The Thargoid ship may need to disable its shields before it can refuel/fire the green beam at the barnacles.[5]

Ram Tah decrypted ancient Guardian logs that indicated Thargoid Barnacles were designed to extract resources from a planet and transform them into Meta-Alloys for use in the production of Thargoid ships and technologies. The Guardians surmised that for the Thargoids, seeding a planet with barnacles was an important process in preparing an area for occupation.[1] The Thargoids' seeding of a region of space that was later developed by the Guardians became the basis for the Guardian-Thargoid War. 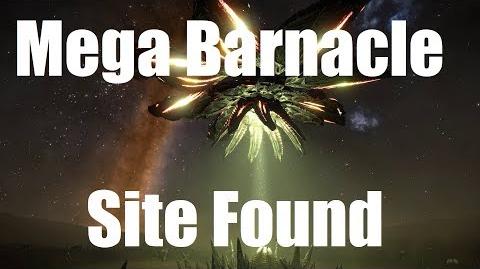 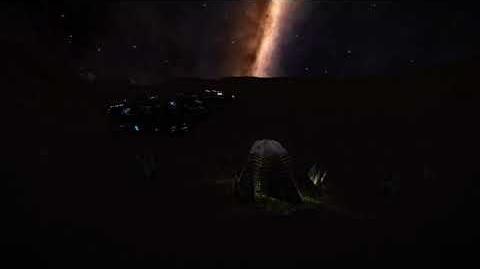 An SRV examining a Thargoid Barnacle

Barnacles and a Python

Symbol on the side of the barnacle

View of the barnacle reported at the Anaconda crash site (GalNet article). This one does not seem to be persistent, and is not visible to all Commanders.

A Thargoid Interceptor interacts with a Barnacle

A Barnacle in a large cluster